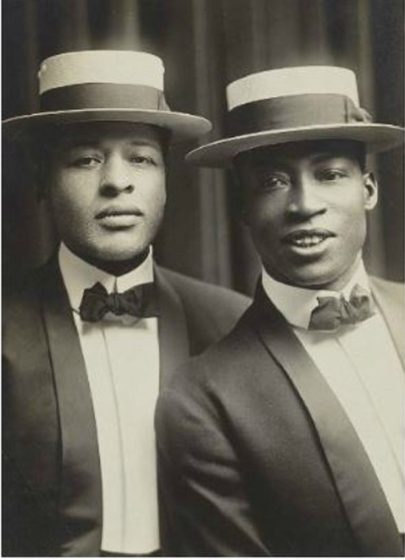 George Walker and Egbert Williams were pre-eminent entertainers of the Vaudeville era and two of the most popular comedians for all audiences of their time.

Walker was born around 1873 in Lawrence, Kansas. His career in show business started with him working as a member of a troupe of black minstrels who traveled throughout his home state. Walker, wanting a solo career worked his way west out to California where he performed in medicine shows.

Egbert “Bert” Williams was probably born in Nassau, Bahamas on March 11, 1875. In 1885, his family moved to California, near Los Angeles. He eventually moved to San Francisco where he gained experience performing in saloons, restaurants, and road shows.

While in California, Walker met Williams and the pair spent two years playing different venues and putting together their act. The pair eventually made their way to Chicago in 1895 where they tried out for Isham’s Octoroons, one of the first Black companies to break from a minstrel format.

Realizing that their act needed improvement, they decided to embrace the coon stereotype, billing themselves as The Two Real Coons. They based their act on standard minstrel routines reduced to a two-man performance: Walker played the part of a dandy and told the jokes, and Williams, dressed in mismatched, oversized clothes, played the straight man. After the audience reacted favorably to a performance in which he blackened his face, Williams donned the burnt-cork mask for the rest of his professional life.

On October 11, 1901, when Williams and Walker made their first recordings for the Victor Company, they became the first African-American recording artists.

Williams and Walker were active in organizing an African-American actors’ union called The Negro’s Society in 1906. Two years later, the team produced and starred in two more successful plays, In Abyssinia and Bandana Land. While touring with Bandana Land in 1909, Walker began to stutter and suffer memory loss, both well-known symptoms of syphilis.  He died on January 8, 1911.

Williams, without a partner for the first time in 20 years, performed in vaudeville for a while and starred in Mr. Lode of Coal in 1910. Williams went on to achieve great success. Williams’ last show, considered one of his best, was Under the Bamboo Tree. He died on March 4, 1922, while touring with the production in Detroit.