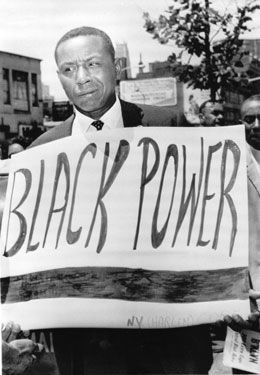 Floyd B. McKissick desegregated the University of North Carolina at Chapel Hill’s Law School. Years later, he became the leader of CORE, the Congress of Racial Equality, taking over from James L. Farmer, Jr.

McKissick was born in the wealthy community of Asheville, North Carolina on March 9, 1922. The area was a summer vacation spot for many affluent people near the Smokey Mountains. His father worked at the Vanderbilt Hotel as a head bellhop, a position that provided a decent income. McKissick’s father stressed to all his children the importance of a good education. He didn’t want them working dead end jobs.

Young McKissick worked his way through high school by delivering groceries and newspapers and by shining shoes. He graduated from high school at the outset of World War II and was drafted into the Army, where he climbed the ranks to sergeant. Seeing the action in Europe, he was awarded a Purple Heart for an injury sustained during battle.

After the war, Floyd McKissick used funds from the GI bill to attend college. He entered the all-black Morehouse College in Atlanta. During his time in college, he was named youth chairman of the North Carolina NAACP. After completing his degree from Morehouse College, Floyd McKissick returned to North Carolina to complete a degree in law. Determined to attend the University of North Carolina at Chapel Hill’s Law School, McKissick applied but was denied admission because of the color of his skin. With the help of NAACP lawyer Thurgood Marshall, who would one day distinguish himself as a Supreme Court justice, McKissick sued the college and won.

He went on to become the first African-American student at the University of North Carolina at Chapel Hill’s Law School, and the first to graduate with a degree in law. After graduation, McKissick opened up a law practice in Durham, North Carolina in 1960.

McKissick always knew that no matter how much education a black person had during that time, they were still oppressed.
“I was as educated as any white lawyer in my area,” he commented. “Do you think I had the opportunity to be a judge? You can educate the black man [but] you’ve got to overcome the racism to get him the job. There’s got to be some counterpart in education of that portion of the white community that is bigoted.”

Using his own children as test cases, Floyd McKissick successfully challenged several all-white schools in Durham, North Carolina. He also quickly became an ad hoc lawyer for CORE, defending demonstrators who were brought to trial on charges of sitting at lunch counters and in theaters marked “for whites only.

In 1970, McKissick won federal funds from the New Communities Act to build a whole new town, Soul City, in rural North Carolina. With visions of a black-run metropolis with business and industrial opportunities for minority enterprises, McKissick and his family became pioneer residents of Soul City. McKissick predicted that the community would have more than 40,000 residents by the turn of the century. His plans never materialized. additional government grants did not arrive, and by the end of the 1970s the U.S. Department of Housing and Urban Development foreclosed on its multimillion dollar loan to the city.