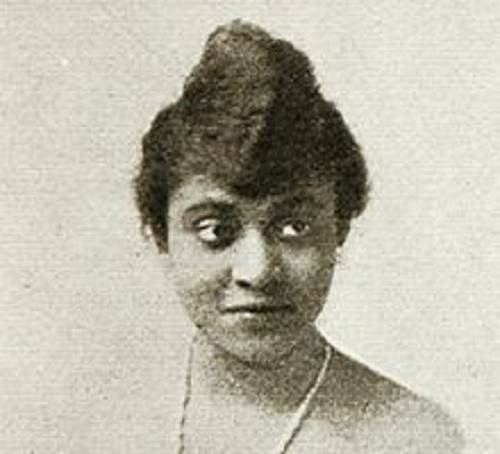 Gerri Major was an African-American woman who lived in Harlem during a career that stretched from the 1920s through the 1970s. She had a successful career as a journalist, editor, newscaster, publicists, public health official, and community leader. She was called one of the ‘new Negroes’ of the early 20th century. By the end of the 1930s, she was one of the well-known African-American women of that time.

Major was born in Chicago on July 29, 1894. Her birth name was “Geraldyn Hodges.” When her mother died giving birth to her, her father arranged for her adoption by an aunt and uncle who lived nearby. Following elementary school, she attended Wendell Phillips High School and subsequently was awarded a work-study scholarship at the University of Chicago from which she graduated with a Bachelor in Philosophy degree in 1915. While a university student, she was one of five founding members of an undergraduate chapter of the Alpha Kappa Alpha sorority.

During the summer months after her graduation Major studied at Hampton Institute and during the next school year she taught dramatic art and physical culture at Lincoln Institute, an African American college in Jefferson City, Missouri. Not liking the situation there she returned to Chicago to enter a two-year program at Chicago Normal School so that she could qualify to teach elementary school in that city. In the fall of 1917 Major served as a teacher-in-training, or “cadet,” in the Chicago public school system.

Major composed and distributed a public announcement for the annual NAACP Dance in Harlem’s Manhattan Casino. The release, which appeared in the New York Age on March 7, led to the job offer that would prove to be the starting point for her career in journalism. Major’s first editorial job was New York social editor of the Pittsburgh Courier. While still contributing extensive new content, she performed more extensive editorial work from 1928 to 1932 for the Inter-State Tattler.

Between 1928 and 1930 Major wrote and presented a review of current events during a New York radio program that aired each week on Sunday afternoon. This made her, as one source put it, “the first Negro woman commercial radio announcer.” The program was the “Negro Achievement Hour,” a variety show featuring talks and music that was carried on two local stations, WABC and WEVD.

In 1933 Major became executive director of a health center on Lenox Avenue in Harlem that was operated by the United Health Association. The following year she was chosen by the Newspaper Guild to work on a welfare publicity project in the Central Harlem Health District.

In 1953, she began a 25 year career at the New York office of the Johnson Publishing Company where she served as society editor and associate editor for “Ebony” Magazine, and later, “Jet” Magazine. She became senior staff editor for “Ebony” in 1967 and briefly was a European correspondent. She wrote and lectured on aspects of black society, and co-authored a book, “Black Society,” published in 1976. Gerri Major died on August 17, 1984.