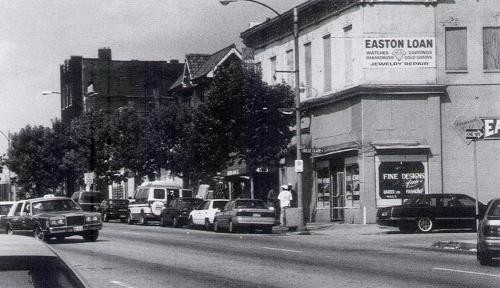 Before being known as the Ville, the town was called Elleardsville, after Charles Elleard, a white horticulturist who migrated to St. Louis in the 1860s from San Francisco, California.

At the start of the 1870s, the community began to attract German and Irish immigrants as well as some Black citizens. In 1873, the city of St. Louis built Elleardsville Colored School No. 8, to accommodate the community’s black students. The school was the earliest African American institution in Elleardsville. The colored school was initially staffed by whites; however, by 1877 African American teachers had replaced white faculty and administration.

As the black population grew the native white, Irish and German residents moved to other sections of the community and established restrictive covenants to exclude black residents. The blacks of Elleardsville began to call their section of the community, “the Ville.”

In 1910, Sumner High School, named after the famous Massachusetts abolitionist and U.S. Senator, was relocated to the Ville. Sumner High was originally built in what is now downtown St. Louis in 1875. At the time it was the first high school for African Americans west of the Mississippi River. Black parents petitioned the St. Louis school board to relocate the school to the Ville to escape the pool rooms and saloons near its downtown location. There were many other significant black institutions were established in the Ville which insured its emergence as a black middle-class community.

In the late 1920s, Homer G. Phillips, a lawyer and community leader who resided in the Ville, led a successful effort to build a hospital in the community. Phillips was assassinated in 1931, six years before the hospital opened. When it did in 1937, the hospital had a 177-bed capacity and became one of the few black teaching hospitals in the nation.

Grace Bumbry, renowned opera star and Chuck Berry, the legendary rock and roll pioneer musician were both natives of the Ville while Tina Turner and Roscoe Robinson, Jr., who became the first black four-star general in the U.S. Army, grew up there.

St. Louis Missouri The VilleThe Ville
« Previous PostDid You Know That BET Was The First African American Founded Company To Trade On The New York Stock Exchange? Next Post »Gospel Grammy Winner Kanye West is the Wealthiest Black American of All Time: Net Worth Valued at $6.6 Billion