The Hyers Sisters: Singers and Pioneers of Black Musical Theater 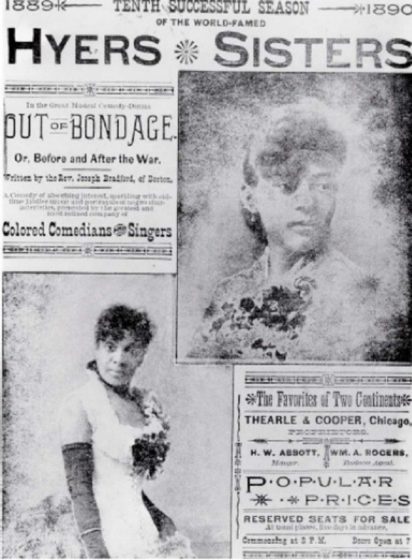 With Joseph Bradford and Pauline Hopkins, the Hyers Sisters produced the “first full-fledged musical plays in which African Americans themselves comment on the plight of the slaves and the relief of Emancipation without the disguises of minstrel comedy.” Their first play was Out of Bondage (also known as Out of the Wilderness).

Their father, Samuel B. Hyers, arrived in Sacramento, California with their mother, Annie E. Hyers after the Gold Rush. He made sure his daughters received both piano lessons and vocal training with German professor Hugo Sank and later opera singer Josephine D’Ormy and they performed for private parties before making their professional stage debut at on April 22, 1867, at Sacramento’s Metropolitan Theater. Anna was a soprano and Emma a contralto.

The Hyers’ family organized a theater company, where they produced musical dramas starring Anna and Emma, including Out of Bondage, written by Joseph Bradford and premiered in 1876, Urlina, the African Princess written by E. S. Getchell and premiered in 1879, The Underground Railway, by Pauline Hopkins in July 1880, and Hopkin’s stage version of Uncle Tom’s Cabin in March 1880. Though Emma Louise had died by 1901, Anna Madah continued to travel with a show of John Isham.