Isaac Burns Murphy: One of the Greatest Riders in Thoroughbred Horse Racing History 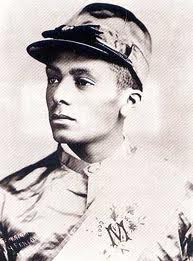 Isaac Burns Murphy was considered one of the greatest riders in American Thoroughbred horse racing history. He rode in eleven Kentucky Derbies, winning three: on Buchanan in 1884, Kingman in 1891, and Riley in 1890.

Murphy was born in Clark County, Kentucky. His father served in the Union army in the Civil War, until his death at Camp Nelson. After the death of his father, his family moved to Lexington, Kentucky where they lived with Murphy’s grandfather. Murphy became a jockey at the age of 14. During this time, he changed his name to Isaac Burns Murphy, in honor of his grandfather.

His unique style of riding the horses, where he would sit upright in the saddle and use words and occasionally his spurs to urge his horse on instead of the whip would have him bursting past the other horses and riders to the finish line. He was one of the most unforgettable riders of his time. Murphy was the only jockey to have ever won the Kentucky Derby, the Kentucky Oaks, and the Clark Handicap all in the same years. He was often referred to as the “Colored Archer,” which was a reference to Fred Archer, a highly regarded English jockey at the time.

Murphy often stated that he won 628 of his 1,412 races. Official records are incomplete, but calculations records show,  he had 539 wins in 1,538 rides, still an unprecedented 34-percent winning rate. At the height of his career, he was averaging $15,000 a year. Murphy was the first jockey to be inducted into the National Museum of Racing and Hall of Fame. Isaac B. Murphy died in 1896 due to heart failure.