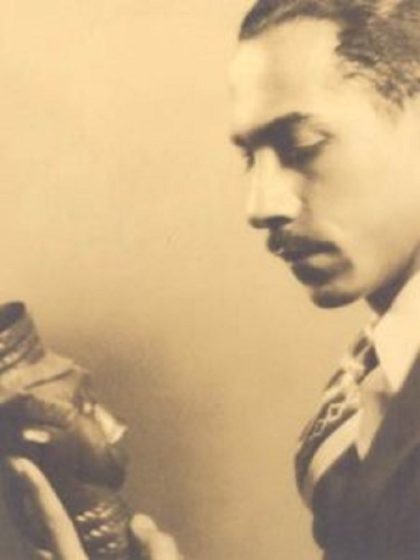 James Lesesne Wells was a leading graphic artist and art teacher, whose work reflected the vitality of the Harlem Renaissance.

Wells was born in Atlanta, Georgia on November 2, 1902. His father was a Baptist minister and his mother a teacher. At an early age, he moved to Florida with his family. His first experience as an artist was through his mother, who encouraged him to help out with art instruction in her kindergarten classes. At the age of thirteen, he won first prize in painting and the second prize in woodworking at the Florida State Fair.

Wells studied at Lincoln University in Pennsylvania for a year before transferring to Columbia University in New York, where he majored in art. His exposure to an exhibition of African sculpture at the Brooklyn Museum of Art was an inspiration to him. He was also greatly influenced by the woodcuts of Albrecht Durer and the German Expressionists — Ernst Kirchner, Karl Schmidt-Rottluff, Otto Muller, and Emile Nolde.

After graduation, Wells created block prints to illustrate articles and publications such as Willis Richardson’s Core CollectionPlays and Pageants of Negro Life.

Later in 1929, Wells was invited to join the faculty at Howard University as a crafts teacher. He taught clay modeling, ceramics, sculpture, metal, and block printing. It took him two years to convince the school that he and linoleum cutting belonged in the College of Fine Arts.

As an activist, Wells joined his brother-in-law, Eugene Davidson, president of the local NAACP chapter, in protesting segregation in lunch counters, stores, and the nearly all white police department and as a result, was often harassed. This persecution probably accounted for some of the religious themes in his work. Wells retired from Howard University in 1968, painting and make prints into his eighties. Color linoleum prints became his specialty.

In 1986, the Washington Project for the Arts assembled a major exhibition of his work, and in 1973, Fisk University mounted another one-man show. His work Flight Into Egypt was exhibited in 1990 in the Harmon’s “Against the Odds” exhibition and still looked as modern as it had when it was created. James Lesesne Wells was a leading graphic artist and art teacher, whose work reflected the vitality of the Harlem Renaissance. Wells died on January 20, 1993 at the age of ninety.