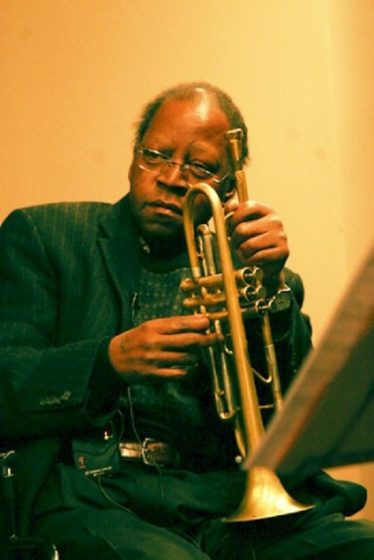 Thara John Memory was a trumpet player, composer, educator, and activist in the Portland jazz community. In 2011, the Portland Jazz Festival named him an Oregon Jazz Master.

Memory arrived in Portland in 1970, when he first saw the city while on tour with R&B star Joe Tex. Memory was influenced both musically and personally by mentors that included his seventh-grade band director, Louis Hamlin, Jr. (author of the James Brown hit, “Every Beat of My Heart”), and his teacher at Alabama State University, William B. Fielder, a jazz and symphony trumpet player.

As a bandleader, Memory produced two CDs, Juke Music (1991) and Chronicle (2008), which recalls his early years in Florida, including residence in Eatonville, hometown of Harlem Renaissance author Zora Neal Hurston. In his 50s, Memory lost parts of two fingers to the effects of diabetes but continued to perform on a trumpet custom-made for him by Portland’s internationally known instrument maker, David Monette.

Memory’s work as a jazz educator may have had the greatest impact on Oregon and national jazz scenes. His student jazz ensembles include award-winning programs at Wilson High School in Portland and the Arts & Communications Magnet Academy in Beaverton.

In February 2017, Memory pleaded not guilty to an indictment by a Portland grand jury on misdemeanor third-degree sexual abuse of former students. He lived in Portland with his wife Karen until his death in June 2017.