Jeremiah A. Brown, known as “Jere,” was a politician and civil rights activist in Cleveland, Ohio. Brown was the first African American to receive a political appointment in Cuyahoga County, the first to serve as a deputy sheriff in Ohio, and the second to be elected to the Ohio state legislature.

Brown was born November 14, 1841, in Pittsburgh, Pennsylvania. He was the oldest child of six children of Thomas A. and Frances J. Brown. His sister, Hallie Quinn Brown, was a noted educator and civil rights, activist. He attended school in Pittsburgh until age thirteen.

Brown worked as a steamboatman, where he claimed a friendship with Mark Twain, it was said that he was also a survivor of the famous 1858 explosion of the steamboat Pennsylvania. Around the age of seventeen, Brown apprenticed himself to James H. McClelland to work as a carpenter and joiner. Many other employees of McClelland quit when Brown joined the shop, unwilling to work with a black person. He also attended Avery College in Allegheny, Pennsylvania for a short time. After his apprenticeship, Brown’s parents moved the family to Chatham, Ontario, to be away from discrimination. When the US Civil War began, Brown moved to St. Louis, Missouri to work on steamboats.

In 1869 or 1870, Brown and his family moved to Cleveland where he began his political career. His first position was as bailiff of the county probate court, followed by the deputy sheriff and county prison turnkey. He then became clerk of the City Boards of Equalization and Revision, and finally letter-carrier for the post office in August 1881, a position he held until being elected in 1885. He was also involved with black social movements, taking part in numerous state and national conventions of colored people at least as early as 1884.

He was elected to the Ohio State House of Representatives in 1855. His district was estimated as being one-tenth black. He frequently worked with another African American legislator elected that same year, Benjamin W. Arnett. Arnett’s district was one-twentieth black. Brown was very active in the legislature, particularly in working to end the Black Laws in Ohio. He was especially known for passing an anti-discriminating insurance bill. Jeremiah Brown died on March 28, 1913. 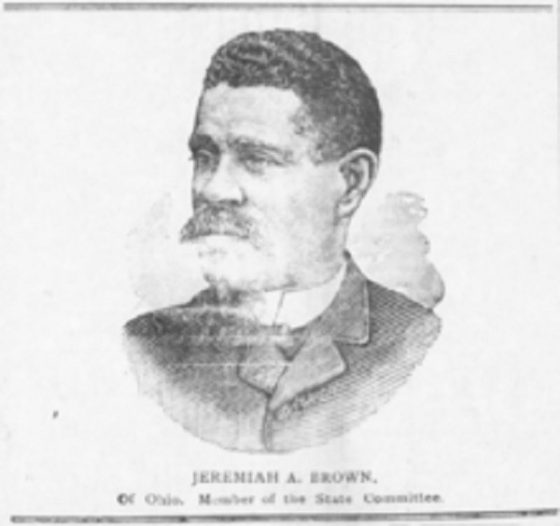