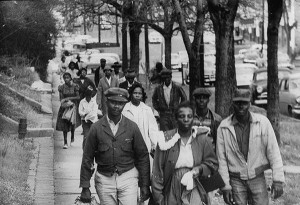 The Montgomery Bus Boycott in Montgomery, Alabama was a crucial event in the 20th Century Civil Rights Movement. On the evening of December 1, 1955 Rosa Parks, a Montgomery seamstress on her way home from work, refused to give up her seat on the bus for a white man and was subsequently arrested. The President of the local chapter of the National Association for the Advancement of Colored People (NAACP), E.D. Nixon, used the arrest to launch a bus boycott to fight the city’s segregated bus policy. Together with Jo Ann Robinson of the Women’s Political Council, and other black leaders, Nixon set plans for the boycott.

The idea of the boycott had been floating around for months. Both Nixon and Robinson were waiting for a test cast to challenge the segregated bus policy in Court. They knew that they would have large support from black women who made up a majority of the bus users. The only thing missing was a good test candidate and respectable, middle-class Rosa Parks seemed perfect for the role.

On Friday December 2, Robinson created a flyer which she distributed to black families around Montgomery. The flyer told of the arrest of Parks and mentioned that 75% of the bus riders were blacks and if there was a boycott of the bus system then the city would be forced to pay attention to these customers.  It then called for a boycott of the buses on Monday December 5th.

Robinson arranged a meeting with Rev. Ralph Abernathy and Rev. Martin Luther King Jr., the ministers of two of the largest black churches in the city. While they hesitated at first, they ultimately agreed to participate and held a meeting at the Dexter Avenue Baptist Church, King’s church, to plan the boycott.  A new organization, the Montgomery Improvement Association (MIA), was created to lead the boycott and Rev. King was appointed its president.  It was also decided that the boycott should continue until the buses were no longer segregated. In order to get people around town during the boycott, the churches bought or rented cars and station wagons to transport people.

Meanwhile boycott supporters challenged the legality of bus segregation in court.   Their case, Browder v. Gayle, was eventually heard by the U.S. Supreme Court which ruled on November 13, 1956, in favor of the plaintiffs. The boycott ended on December 20, 1956, 381 days after it had begun. The buses in Montgomery were now integrated.