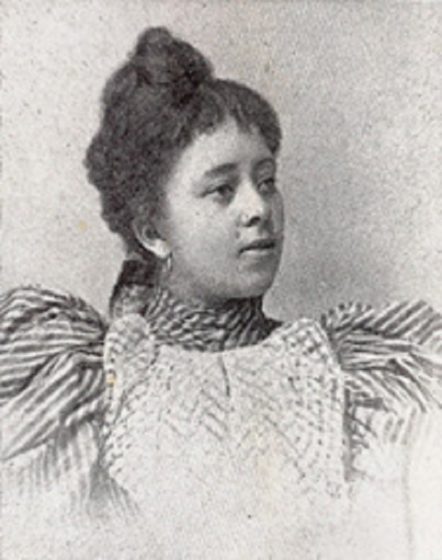 Lutie Lytle was the first African American admitted to the Kansas bar. She was also among the first black women to earn a law degree.

Lytle was born around 1875 in Murfreesboro, Tennessee, where her father’s family lived for some time. John R., Mary Ann “Mollie,” the family’s four children and Lutie’s grandmother moved to Kansas around 1882, a time when many African Americans were relocating from Tennessee to Kansas with the Exoduster movement.

At the age of 21, Lutie moved to Chattanooga, Tennessee. There she taught school to pay for her tuition at Central Tennessee College in Nashville. While in college, Lutie also became involved other social activities.

Lytle was admitted to the Criminal Court in Memphis, TN in September 1897. Tennessee, after passing an oral exam. Newspaper accounts said that she was the first African American woman to be licensed to practice in Tennessee, and third in the United States. Later that month, after returning to Topeka, she became the first African American woman admitted to the Kansas bar.

After the bar, Lytle lived in Topeka and became involved in the Interstate Literary Association with members from Kansas City, Missouri and Kansas communities. She was invited to lecture for women’s groups and local colleges on law related to domestic issues.

In fall 1898 Lytle announced that she would join the faculty at Central Tennessee. Newspaper accounts claimed that she was the only woman law instructor in the world. She served one session, 1898 – 1899, in that position.

By the early 1900s, Lytle was living in Brooklyn, New York, with her husband, Alfred C. Cowan, who was also a lawyer. The couple attended the annual convention of the Negro Bar Association in 1913. Lytle was the first African American female to become a member of a national bar organization and the first to participate with a spouse. After her husbands

sudden death in September 1913, Lytle took over his practice and continued as a sole practitioner for some time.

On July 10, 1916, Lutie Lytle-Cowan married the Reverend Stephen Alexander McNeill, a minister in the African Methodist Episcopal Zion Church. She appears to have given up practicing law upon her second marriage. Reverend McNeill, a native of Robeson County, North Carolina and a graduate of Ohio Wesleyan University and the divinity school of Boston University, served churches in Port Chester, New York, Harrisburg, Pennsylvania (Wesley Union AMEZ Church) and New Paltz, New York and was named presiding elder of the Hudson River district of the AMEZ church in 1927. He died March 26, 1934 in Peekskill, New York almost immediately after delivering a sermon. Lytle did not have children and the date of her death is unconfirmed, but believed to be in 1950.

Lutie Lytle
« Previous PostMarie-Joseph Angélique: Escaped Bondage Only to Be Recaptured and Tortured to Death Next Post »The Assassination of Martin Luther King Jr.