On this day in Black history, California politician Tom Bradley is elected mayor of Los Angeles in 1973. He also holds several distinctions as mayor. He was the first Black mayor of L.A., the second Black mayor of a major U.S. city, and the longest termed mayor in L.A. history.

After several years as a member of the United Club and involvement on the Democratic side of the spectrum and serving the city as a ranking police officer, Tom Bradley would make a bid for the 10th District of Los Angeles’s City Council in mid-1961. This position was originally held by Charles Navarro who had just moved on to city controller.

Bradley wouldn’t get the seat but would run against Joe E. Hollingsworth two years later in April 1963. He proved successful in the first election with 17,760 votes to Hollingsworth’s 10,540. He followed this up with 17,552 to 10,400. Bradley was sworn in later that month as the first Black person to hold a seat on the city council.

He would make his first attempt for the mayor’s office in 1969. His opponent was Sam Yorty, a fellow Democrat serving since 1961. He would come up short in this attempt but had a strong showing early in the campaign. His loss came down to Yorty going the racial fear route. He said that Bradley would allow Black Nationalist groups to have run of Los Angeles. This tactic cooled a lot of momentum Bradley had in the election.

In 1973 Tom Bradley defeated Sam Yorty and made a number of changes to the city that opened up business, transportation, and development in Los Angeles. He also signed off on Los Angeles’ first pro-gay rights bill before the decade was out and led the city in getting the 1984 Summer Olympics. He had an opportunity to enter national politics with a position in Jimmy Carter’s cabinet but declined to continue running Los Angeles.

The 1970s was a decade mired with crime and Los Angeles wasn’t immune. While the police chief under Yorty was ousted, he was replaced with someone who also unfavorable—Daryl Gates, co-founder of the SWAT unit and a chief known for being hyper aggressive. Bradley’s term also saw drugs hit the city and street gangs increase in power.

The improvements to transportation were undone by the late 1980s with pollution and traffic problems. Also, businesses moving into neighborhoods and buying up property because an issue that Bradley wouldn’t be able to avoid. His run as mayor finally unraveled for a number of reasons including supporters losing their city council seats.

The final nail came in the early 1990s with the 1991 police beating of Rodney King. Following that was the 1992 riot as a result of the acquittal of the officers. He opted to not run again in 1993. 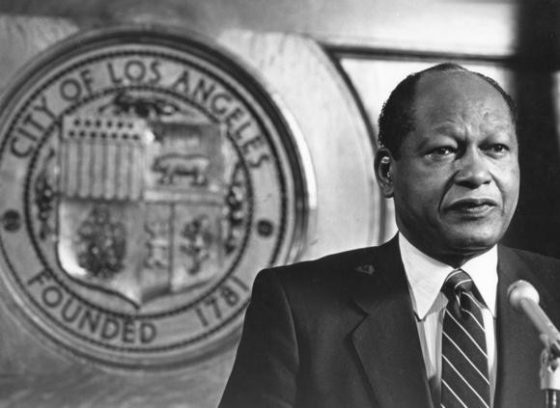