George B. “Spider” Anderson is considered one of the greatest African American jockeys in horse racing history.  Very little is known about the early life of Anderson.

Anderson achieved his greatest accomplishment by being the first African American jockey to win the Preakness Stakes held at Pimlico Race Course in Baltimore, Maryland. The Preakness Stakes is the 2nd stage of the Triple Crown series, between the Kentucky Derby and the Belmont Stakes in New York.

Anderson was accused of striking one of his coaches, James Cook, across the head with a whip before the day of the race, May 10, 1889. The reason for this altercation between the two remains unknown. There is however speculation that because the 1889 Preakness Stakes only consisted of two horses; Buddhist, rode by Anderson, and Japhet, owned by former Maryland Governor Oden Bowie, there was tension between Cook, who was a friend of Governor Bowie, and Anderson. There may have been words exchanged before the race which led to Anderson’s attack. Despite the altercation, Anderson was allowed to participate in the Preakness Stakes before receiving any punishment for his assault on Cook by authorities.

Anderson went on to finish the race with an astonishing time of 2:17.50 and became the 17th winner of the Preakness Stakes. In 1891, Anderson had two other significant victories to his career, the Alabama Stakes at the Saratoga Race Course in Upstate New York and the Philip H. Iselin Handicap at the Monmouth Race Course in New Jersey.
Anderson’s career ended like many other African American jockeys’ with the passage of Jim Crow Laws which pushed many of them out of the sport in the early 1900s. 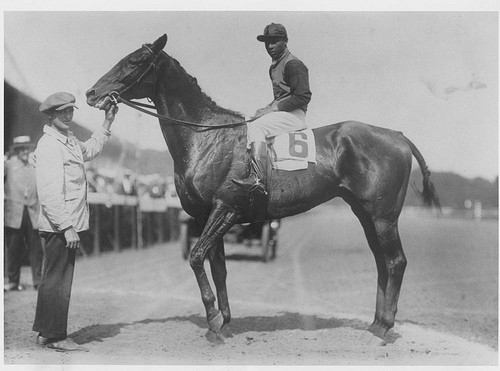 No available photo of George B. “Spider” Anderson