The First Black Woman to Run for the U.S. Presidency: Shirley Chisholm’s Legacy 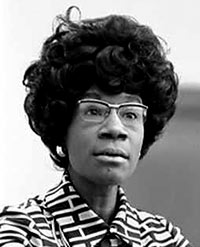 A trailblazer for black women and minority rights, Shirley Anita St. Hill Chisholm broke many barriers. She was the first black woman elected to Congress and the very first black person to run for the United States Presidency. As the firstborn of four daughters to Caribbean immigrants in Brooklyn, Chisholm’s family valued her education. For years of her life she lived with her maternal grandmother in Barbados, attending school due to her mother’s distrust of the education system in America and what it could offer her daugher. Chisholm grew up knowing the value of her early education and later received her Bachelors of Arts from Brooklyn College of the City University of New York in 1946. She was known for her skills in debating, and was a member of the Delta Sigma Theta sorority. Not stopping there, she furthered her education by earning a Masters of Arts degree from Columbia in 1952.

Chisholm’s career in politics did not begin until 1964, when she became a member of the New York State legislature as an assemblyperson. Her interest in politics began when she was working as a nursery school teacher and later the director of a child care center. The topics of welfare and education pushed her to the world of politics. After spending four years in the New York State legislature, Chisholm was elected to the United States Congress, making history by becoming the first black woman to do so. Initially, Chisholm was assigned to the House Agricultural Committee, an assignment she felt was irrelevant to her constituents and her mission. After receiving advice from Rabbi Menachem M. Schneerson when she confided in him with her complaints, he gave her the idea to use her position to give surplus food to those who needed it. Chisholm went on to play a role in creating the Special Supplemental Nutrition Program for Women, Infants, and Children program. Demanding reassignment after some time, Chisholm was then placed in the Veterans’ Affairs Committee, spending a short time there before being assigned to the Education and Labor Committee, where she preferred all along.

Chisholm only served two terms in the United States Congress, moving on afterward to bigger aspirations. She made history again when she became the first black woman to run for president. She was quoted saying in her announcement of campaign speeches, “I am not the candidate of black America, although I am black and proud. I am not the candidate of the women’s movement of this country, although I am a woman and I am equally proud of that. I am the candidate of the people, and my presence before you now symbolizes a new era in American political history.” Chisholm’s spirited campaign was a huge change to the status quo, inspiring to black Americans throughout the country. She ultimately lost the Democratic nomination to Senator George McGovern of South Dakota. Though her campaign was met with defeat, Shirley Chisholm is still remembered today as a trailblazer for black women.

« Previous PostHelen Louise Dillet Johnson: First Black Woman to Teach in a Florida Grammar School Next Post »The Color of Freedom: The Legacy of Colorism