Tight Packers or  Loose Packers? A Question Of Profit On The Slave Ships 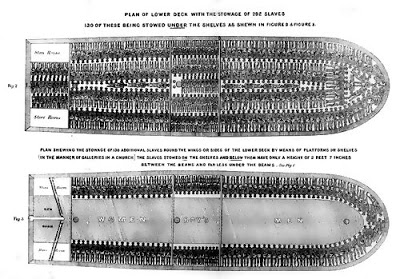 Whether a slave ship was a “tight-packer” or a “loose packer” was generally a question of economy – what was most profitable? It was believed that by given the slaves better food, a certain amount of liberty and more space the death rate, which generally was very high, would go down, and the captain could in fact receive a better price for the slaves in the Caribbean, because the slaves were in a better condition.

However, the supporters of tight packing answered by saying that even though the death rate might be a bit lower and that the slaves generally might be at better health upon arriving in the Caribbean on “loose packers”, tight packing would be more profitable and safer. Slaves showing signs of starvation and who needed to be fattened up, or with wounds which needed to be hidden, could be fixed in slaves yards before the slaves were offered for sale on slave markets. Tight packers believed that by tight packing they would be more certain of a good profit, because even though a lot of slaves might die, they still would have more than enough left.

The disagreement about which of the two methods of packing slaves were the most profitable, continued as long as the trade itself. However, from the 17th century and onwards most slave ships were “tight packers”. The profit on each slave, no matter the state the slave arrived in, was so high that most captains loaded his ship to its upmost capacity and became “tight packers”.