The Unforgettable Springfield Race Riots of 1908

Sparked by the arrest of two African-American men who were suspects in some violent crimes against the whites, the Springfield Race Riot of 1908 was a mass civil disturbance in Springfield, Illinois, U.S. on the mid-August, between dates 14 and 16 of 1908. A mob seeking to act on the two men for lynching had just discovered that the sheriffs had helped the men escape from their sight, transferring them out of the city. They started rioting starting from the black neighborhoods while searching for where to express their anger. The mob ended up killing any Black citizens they encountered along the street and destroying their homes and businesses. For over the past century before then, this riot marked the first and disastrous riot across the entire North. 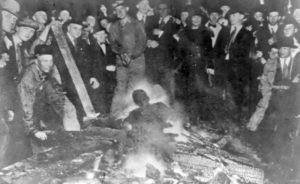 Upon receiving the news of the black criminal deeds against the whites, that a white woman has been assaulted in her home by a black man, the white population of Springfield quickly reacted to reports. In a short while, another instance of a white woman’s assault by a black man was in the news. These incidences, following each other just within hours, inflamed a gathering crowd, white hastily turned to an unruly mob. An African-American vagrant- Joe James was taken into custody by the Springfield Police for one of the reported assaults. For the second case assault, another black man- George Richardson, a local factory worker was arrested. As a result, the mob that had been gathering since the newsbreak of the assaults quickly assembled at the Sangamon County Court and became disorganized and violent as they demanded to lynch the two men under the police custody.

After all their efforts in getting the accused men who had been moved to undisclosed place failed, the mob turned its wrath of retaliation on two other black men who were within their vicinity. These two men were William Donegan and Scott Burton. The mob further advanced its fury on the homes of the neighboring African-American families within Springfield. Furthermore, after rioting and storming the entire city, they then extended their anger and violence into other smaller communities on the outskirts of the city. They primarily targeted the ammunition and gun stores where they could quickly rearm themselves. Strategically, their leaders carefully directed them to destroy only the businesses and homes that were either owned by the African-Americans or served the black community. Unsurprisingly, the neighboring white homes and whites’ businesses were left untouched.

In their self-defense, some of the African-Americans in Springfield fought back, thereby further intensifying the situation. They shot back when fired upon. For instance, the first victim of the lynching mob, Burton Scott, used his shotgun in the attempt to defend himself and to help save his home. The second victim lynched, an 84-year-old cobbler, William Donegan, whose image had been tainted in the eyes of the whites since he had been married to a white woman for more than three decades.

By the end of the riots, the governor had posted in thousands of military personnel to restore order and normalcy. At least seven people were killed and approximately $200,000 valued properties were damaged, mostly in the Black neighborhoods. About 2,000 African-Americans were driven out of the Springfield city. More than 150 suspected mob participants were arrested. However, it was later revealed that George Richardson, the man who was initially charged with the assault, had wrongly been identified, and his indictment dismissed. This was one of the few riots of Whites against Blacks in the 20th-century in the U.S. history. A year later, the riot became one of the primary factors that led to the foundation of the National Association for the Advancement of Colored People (NAACP) by both Blacks and Whites, with the central goal of improving civil rights for Black people, and to educate all the American citizens on the need for racial equality.