Venerable Pierre Toussaint was born a slave on June 27, 1766 in Saint-Marc, Artibonite, Haiti. His master, Jean Berard, taught him how to read and write. Jean Berard was considerate of his slaves, by the time Pierre reached his teens he was well aware of how slaves were sometimes treated on other plantations by their owners and over-seers. Misconduct could merit rigorous punishment.

When the Berard family became concerned about a slave uprising they packed up and moved to New York.  They took along Toussaint, his sister and a few other slaves.  Toussaint was allowed to find work; he apprenticed to a leading hairdresser, and soon became a popular stylist. When his master, Berard, died, he stayed on to care for his ailing widow. Toussaint became a freedman from slavery when his mistress died in 1807. 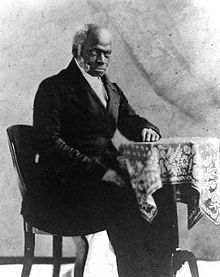 Working for himself, Pierre became a very wealthy man. He fell in love with a young Juliette Noel who was a 15 year old slave. Toussaint purchased and freed her, and married her. As the two took their faith seriously, they started work to help the poor in New York. They turned their own home into a shelter for children with no families, a credit bureau, an employment agency, a hostel for priests and a other poor travelers. Toussaint could have been one of the city’s wealthiest men – had he not given away everything he earned to the poor and to institutions. More remarkable than his many charities, however, was the influence he had on people. He was admired, trusted, and well-loved; it is noted that Toussaint and his wife would help anyone in need. When his sister Rosalie died, Toussaint and his wife adopted her daughter. On December 17, 1997, Pope John Paul II declared Pierre Toussaint, “Venerable”, thus placing him firmly on the road to becoming North America’s first black saint.

Venerable Pierre Toussaint was a man who was proud of his faith, proud of his culture and committed to serving others. Toussaint died on June 30, 1853 in New York, New York of natural causes.