Wilmington Massacre of 1898: The White Supremacist Movement To Overthrow An Elected Biracial Government

On November 10, 1898, one of the worst “race riots” in U.S. history left 30 to 100 African Americans dead in Wilmington, NC and the elected government was deposed in a coup d’etat.

Before the violence, this port city on the Cape Fear River was remarkably integrated. Three out of the ten aldermen were African Americans, and blacks worked as policemen, firemen, and magistrates.

Democrats, the party of the Confederacy, vowed to end this “Negro domination” in the 1898 state legislative elections. Their strategy was to enlist men who could write (white journalists and cartoonists), men who could speak (white supremacists who whipped up emotions at rallies), and men who could ride (the Ku Klux Klan-like “Red Shirts” who were basically armed ruffians on horseback).

The white supremacists used an editorial by Alex Manly, the editor of Wilmington’s black newspaper the Daily Record, to stir a firestorm at the time of the elections. The editorial responded to a speech by a Georgia socialite who promoted lynching as a method “to protect woman’s dearest possession from the ravening human beast.

” Manly condemned lynching and pointed out the hypocrisy of describing black men as “big burly, black brute(s)” when in reality it was white men who regularly raped black women without impunity. He added that some relations between the races were consensual. 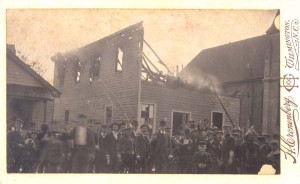 Some 800 white citizens led by Waddell met at the county courthouse and produced the “White Declaration of Independence” which stated: “We, the undersigned citizens… do hereby declare that we will no longer be ruled, and will never again be ruled by men of African origin.” The following day—November 10—Waddell led a mob of 2,000 armed men to the Daily Record and burned the building to the ground.

« Previous PostMinnie Ripley: Civil Rights Activist Among One of the First to Vote in Mayersville, MS Next Post »Poem: "Everything Is Free" by George Elliott Clarke