#Black Man Killed in Birmingham, Alabama, during Arrest for Failure to Take Dog to Veterinarian

The deputies showed up at the Lacey’s home when Robert Lacey was just getting out of the shower. When he answered the door, he was ordered to get dress and go with the deputies. Lacey asked the deputies why, and when they told him, he told the deputies to just take the dog. The deputies then told Mr. Lacey that they were not interested in the dog, and wanted him. So, again he was instructed to go get dress.

As Lacey was reaching for his clothes in a dresser a gun fell out and onto the floor. The deputies quickly jumped on Lacey and forced him to the floor. When he was later standing the deputies pushed him against the wall and attempted to handcuff him. Lacey asked if he could just walk with them to the car, but the deputies said, “Boy, you leaving here in handcuffs, dead or alive.” Lacey was a large man; as the deputies attempted to wrestle him down, one of them fell to the ground, and the other then shot Mr. Lacey in the leg. The deputies later claimed Mr. Lacey lunged at them before the second shot, but Mr. Lacey’s family insisted Mr. Lacey fell to the ground before the deputy shot him again, between the eyes.” The neighbors were instructed by the police to move the body before the coroner arrived to the house. 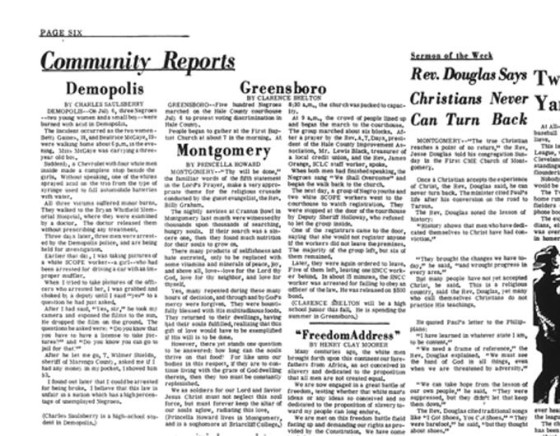 On July 6, 1965, Betty Gaines, 18, Beatrice McGaye, 19, and a 3-year-old boy were walking home along a road in Demopolis, Alabama. Demopolis is located about fifty miles west of Selma, Alabama. It was a normal day and nothing seemed out of the ordinary. Around 6 p.m., a Chevrolet with four white men approached the young black children and stopped. One of the men inside the car, sprayed the two young girls, and the boy with battery acid, and then sped away.

Gaines, McGaye, and the young boy suffering with severe acid burn injuries began walking to Bryan Whitfield Memorial Hospital. Once they arrived at the hospital, a doctor examined them but, would not treat them or give them a prescription for treatment. Months before this attack, the Selma to Montgomery march had attracted people from all over the world to the region to join local activists in a protest against voter discrimination. This is how whites retaliated with violence, eviction from land, and economic harassment.