At 8 Feet 8 in, The Tallest African American On The Planet, John Rogan Was More Than Just The “Negro Giant”

John William Rogan was born in 1868 in Sumner County, Tennessee. Also known as “Bud” rogan, he is one of 16 individuals in medical history to reach a height of eight feet or more.

John William Rogan began to grow very rapidly at the age of 13 leading to Ankylosis, and eventually he could not stand or walk. He moved around in a cart which he had made himself from his bed, pulled by goats.

Like many other tall people on the list, John William Rogan didn’t have a proper source of income and struggled to live a happy life. Due to ankylosis, he was not able to work. Fortunately, he was able to sell self-made portraits and postcards at local railway station.

Noted in a 1897 article in the Kansas City Journal, Rogan had a number of his drawings published. He refused all offers to join the carnival and side shows.

Shortly before he developed ankylosis, Rogan was 8 feet 6 inches tall and weighed 300 lbs. His exact height was not measured until his death, and he was measured while in a sitting position. At that time, he measured 8 feet 8 inches tall, but weighed only 175 pounds, making him the tallest African American and the second tallest man ever recorded. John William Rogan died in 1905 from complications of his disease. 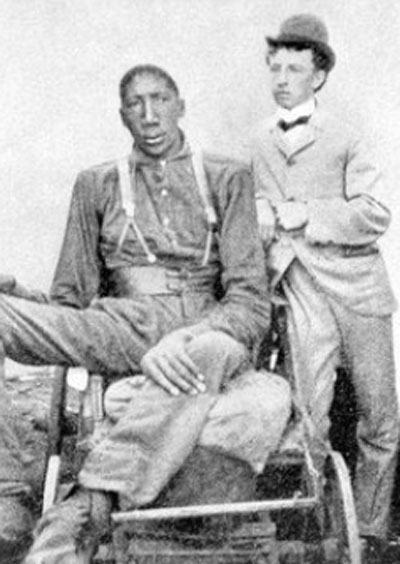