On August 17, 1965, six days of rioting finally came to an end in the Watts neighborhood of Los Angeles, California.

It all began on August 11, 1965, when brothers Marquette and Ronald Frye were driving in Watts. They were pulled over by a police officer, and a crowd quickly gathered as police questioned the Frye brothers. Both the crowd and the police presence grew. When the boys’ mother, Rena Frye, arrived on the scene, the situation quickly began to deteriorate. A fight ensued and all three Fryes were forcibly arrested.

The crowd became outraged and began throwing rocks at police cars, city buses, and other motorists. Pockets of rioting soon erupted throughout the 20-block area of Watts. 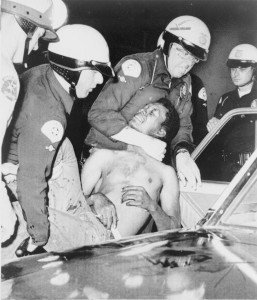 Black youth, frustrated with law enforcement and city officials, took to the streets and began throwing bricks and debris at police cars, white passersby, and store windows. Thousands took to the streets and were met by a force of 400 police officers. Violence ensued, gunfire was exchanged, and rioting lasted for a total of six days. When the riots ended, there were 34 deaths, over 1,000 injured, and close to 4,000 arrests and $40 million dollars in damage.

After the riots, California Governor Pat Brown convened a commission to identify the cause of such a violent uprising. Four months later, a report was issued concluding that the riots were caused by a culmination of black residents’ long-standing dissatisfaction with high unemployment, poor housing, and inadequate schools.

Hosted by the late D’Army Bailey, Moments in Civil Rights History is produced in collaboration with the Equal Justice Initiative and is part of Comcast NBCUniversal’s “His Dream, Our Stories” project. Visit His Dream, Our Stories for more Civil Rights History, first hand accounts from those who led, participated in, or benefited from the Movement, or to share a civil rights story of your own (or that of a loved one).