Eighty-five years ago, two young African-American men, Thomas Shipp and Abram Smith, were lynched in the town center of Marion, Ind. The night before, on Aug. 6, 1930, they had been arrested and charged with the armed robbery and murder of a white factory worker, Claude Deeter, and the rape of his companion, Mary Ball.

That evening, local police were unable to stop a mob of thousands from breaking into the jail with sledgehammers and crowbars to pull the young men out of their cells and lynch them.

News of the lynching spread across the world. Local photographer Lawrence Beitler took what would become the most iconic photograph of lynching in America. The photograph shows two bodies hanging from a tree surrounded by a crowd of ordinary citizens, including women and children. Thousands of copies were made and sold. The photograph helped inspire the poem and song “Strange Fruit” written by Abel Meeropol — and performed around the world by Billie Holiday. 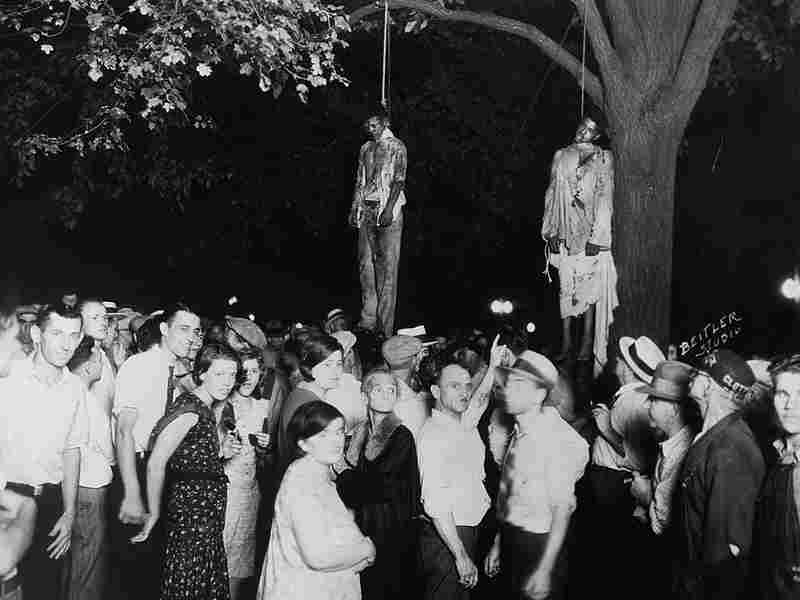 Eighty-five years ago, on Aug. 7, 1930, Lawrence Beitler took what would become the most iconic photograph of lynching in America. Thomas Shipp and Abram Smith were lynched in the town center of Marion, Ind., for allegedly murdering a white factory worker, Claude Deeter, and raping his companion, Mary Ball. But the case was never solved. Lawrence Beitler/Bettmann/Corbis

But there was a third person, 16-year-old James Cameron, who narrowly survived the lynching.

They got me up to the tree and they got a rope and they put it around my neck. And they began to push me under the tree. And that’s when I prayed to God. I said, ‘Lord have mercy, forgive me my sins.’ I was ready to die.

The mob grabbed Shipp and Smith first — and then came back for Cameron. He had a noose around his neck when he made an improbable escape.

“After 15 or 20 minutes of having their pictures taken and everything, they came back to get me,” Cameron told NPR in 1994. “Just then the sheriff, and he was sweating like somebody had throwed a bucket of water in his face. He told the mob leader: ‘Get the hell out of here, you already hung two of ’em so that ought to satisfy ya.’ Then they began to yell for me like a favorite basketball or football player. They said: ‘We want Cameron, we want Cameron, we want Cameron.’