The Great Fire of 1901 in Jacksonville, Florida

The Great Fire of 1901 was the result of racism. Many have heard of the Great Fire but not too many know what started the disaster on Davis street in the heart of Jacksonville, Florida’s African American community.
At the time, James Weldon Johnson, who later became famous in his own right, was the principal of the Stanton School. In his autobiography “Along This Way,” Johnson wrote this interesting line about the events he witnessed that day:

“We met many people fleeing. From them we gathered excitedly related snatches: the fiber factory catches afire – the fire department comes – fanned by a light breeze, the fire is traveling directly east and spreading out to the north, over the district where the bulk of Negroes in the western end of the city live – the firemen spend all their efforts saving a low row of frame houses just across the street on the south side of the factory, belonging to a white man named Steve Melton.”

According to ,a Times-Union article by staff writer Sharon Weightman, Johnson also alleged that when people complained to the fire chief, he said it would be a good thing for blacks’ homes to burn. Eight hours later, the fire had become one of the most destructive events in American history, leaving 10,000 residents homeless and destroying 2,368 buildings in the process. 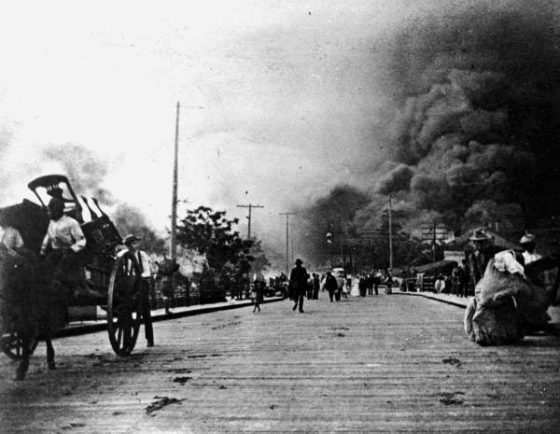 Great Fire of 1901
« Previous Post"All Men Are Created Equal": How Mum Bett Not Only Won Her Lawsuit For Freedom But Was Assessed Damages For Her Labor Next Post »J. Pennoyer Jones: Businessman in Railroad Speculation and Land Development