Happy Birthday to Minister Louis Farrakhan! For decades Min. Farrakhan has led the Nation of Islam, an African-American movement that combined elements of Islam with black nationalism for decades.

Min. Farrakhan was born Louis Eugene Walcott on May 11, 1933, in in the Bronx, New York. He was raised by his mother, who came to the United States from the Caribbean island of St. Kitts. He planned to be an educator, and won a scholarship to Winston-Salem Teachers College. However, he left after two years to pursue his passion for music. His talents include being a great singer and skilled violinist. He was often referred to as “The Charmer,” and achieved fame in Boston as a vocalist, calypso singer, dancer and violinist, until he found a different calling.

Leader of the Nation of Islam

He joined the Nation of Islam in 1955 and in 1978 led a breakaway group of the Nation of Islam that preserved the original teachings of Elijah Muhammad. He started a newspaper, The Final Call, to help him communicate his views to others around this time. In his new position, Min. Farrakhan remained outspoken on many social and political issues, sometimes coming under fire for his racial and religious comments.

One of Min. Farrakhan’s most significant accomplishments has been organizing the Million Man March on Washington, D.C., in 1995. He also led the Million Family March in 2000. To this day, Min. Farrakhan remains a highly respected figure. 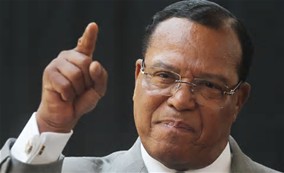