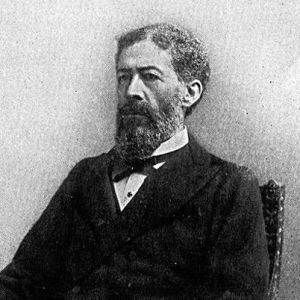 John Mercer Langston (1829-1897) was born into slavery, but by virtue of his intelligence and the education he received in Ohio he became president of Virginia’s first college for African Americans, now Virginia State University. In 1888 he ran for the U.S. House of Representatives as one of two Republican candidates from his district. Many white Republicans voted for a white Republican and that allowed the Democratic candidate to claim victory. Corruption at some polling places was so bad that many Democratic ballots were disallowed, and as a result Langston became the first African American from Virginia elected to Congress. He served only part of one term. Before the next election so many white Republicans had become convinced that cooperation with African Americans was unacceptable that he was not renominated, and during the next decade Virginia’s Republicans, like Virginia’s Democrats, squeezed blacks out of responsible roles in party affairs and eventually acquiesced in eliminating African American men from political life.