June 13, 1956: The Court Orders for the Montgomery, Alabama, Buses to be Desegregated

On this date, June 13, 1956, the U.S. Supreme Court ruled that the Montgomery, Alabama buses be desegregated, in the case of Browder v. Gayle. The person behind all the court events and bus boycotts was Rosa Parks. 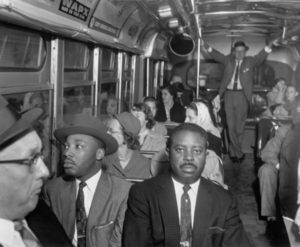 Rosa Parks is famous for launching the Montgomery Bus Boycott by refusing to give up her seat on a segregated Montgomery, Alabama, bus on December 1, 1955. The Montgomery Bus Boycott, a seminal event in the Civil Rights Movement, was a political and social protest campaign against the policy of racial segregation on the public transit system of Montgomery, Alabama. The campaign lasted from December 5, 1955; to December 20, 1956, when a federal ruling, Browder v. Gayle, took effect and led to the U.S. Supreme Court decision, which declared the Alabama and Montgomery laws requiring segregated buses to be unconstitutional. This was after Rosa Parks, an African-American woman was arrested for refusing to surrender her seat to a white person. Several other prominent figures in the Civil Rights Movement participated in the boycott, including Reverend Martin Luther King Jr. and Ralph Abernathy.

Although the boycott, which began on December 5, 1955, is one of the iconic events of the civil rights movement, indeed the buses were desegregated by a lawsuit that began several months earlier. The plaintiffs in the case were 15-year-old Claudette Colvin, the first person arrested, Mary Louise Smith, Susie McDonald, Jeanette Reese, and Aurelia Browder. On this day, 13th June 1956, a federal court in Alabama ordered the buses desegregated, in Browder v. Gayle, ruling that the segregated buses violated the Equal Protection Clause of the Fourteenth Amendment. The U.S. Supreme Court upheld the decision on December 17, 1956.

A three-judge panel heard the initial District Court case. One of the two judges in the majority was Frank M. Johnson, one of the most famous judges in the history of the civil rights movement. Browder v. Gayle was the first among the several important decisions responsible for the expansion of civil rights and civil liberties.

Rosa Parks was a seamstress by profession. She was also the secretary for the Montgomery chapter of the NAACP. Twelve years before her historic arrest, Parks was stopped from boarding a city bus by driver James Blake, who ordered her to board at the back door and then drove off without her. Rosa vowed never again to ride a bus driven by Blake. As a member of the NAACP, Rosa was an investigator assigned to cases of sexual assault. In 1945, she was sent to Abbeville, Alabama, to investigate the gang rape of Recy Taylor. The protest that arose around the Taylor case was the first instance of a nationwide civil rights protest, and it laid the groundwork for the Montgomery bus boycott.

Garrow, David J., editor, The Montgomery Bus Boycott and the Women Who Started It: The Memoir of Jo Ann Gibson Robinson (Knoxville: The University of Tennessee Press, 1987).