On this day, 18th June, we celebrate the 75th birthday of the legendary South African president, who was preceded by the late Nelson Madiba Mandela. President Mbeki’s reign saw the South African economy grow by a significant percentage.

Thabo Mbeki is a South African politician who served as the second post-apartheid President from 14th June, 1999 to 24th September, 2008. On 20th of September 2008, with approximately 9 months left in his second term, Mbeki announced his resignation after being recalled by the National Executive Committee of the ANC, following a conclusion by Judge Nicholson C. R. of improper interference in the National Prosecuting Authority (NPA), including the prosecution of Jacob Zuma for corruption. On 12th January 2009, the Supreme Court and Court of Appeal unanimously overturned Judge Nicholson’s judgment; however, Thabo Mbeki’s resignation still stood.

During his tenure in the office, the South African economy grew at an average rate of 4.5% per year, creating employment in the middle sectors of the economy. The black middle class was significantly expanded with the implementation of Black Economic Empowerment (BEE). This growth aggravated the demand for trained professionals by emigration due to violent crimes but failed to address unemployment amongst the unskilled and illiterate bulk of the population. 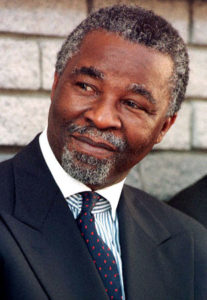 FDI) and made South Africa the focal point of African growth. He was the architect of NEPAD whose aim is to develop an integrated socio-economic development framework for Africa. As well, he oversaw the successful building of economic bridges to BRIC (Brazil, Russia, India, and China) nations. This was followed by the eventual formation of the India-Brazil-South Africa (IBSA) Dialogue Forum to “further political consultation and coordination and to strengthen the sectoral co-operation, and economic relations.”

Mbeki has mediated in difficult and complex issues and conflict challenges on the African continent including Burundi, Democratic Republic of Congo (DRC), Ivory Coast, and some important peace agreements. He oversaw the transition from the Organization of African Unity (OAU) to the African Union (AU). He became a vocal leader of the Non-Aligned Movement in the United Nations, and, while leveraging South Africa’s seat on the Security Council, he advocated for the reform of that body.

Nonetheless, Mbeki has received worldwide criticism for his stance on AIDS. He questioned the link between HIV and AIDS and still believes that the correlation between poverty and the AIDS rate in Africa was a challenge to the viral theory of AIDS. His fate was not helped by Health Minister Manto Tshabalala-Msimang and the overhaul of the pharmaceutical industry in South Africa.

Thabo’s ban on the antiretroviral drugs in public hospitals is estimated to be responsible for the premature deaths of between 330,000 and 365,000 people. He has also been criticized for responding to negative comments made about his government by accusing critics of racism.

Throughout his life in leadership, Mbeki has received several awards, some of which include the Good Governance Award in 1997 by the US-based Corporate Council on Africa. He received the Newsmaker of the year award from Pretoria News Press Association in 2000 and repeated the honor in 2008; but this time, under the auspices of media research company Monitoring South Africa. In the honor of his commitment to democracy in the new South Africa, Mbeki was awarded the Oliver Tambo/Johnny Makatini Freedom Award in 2000. Mbeki was awarded the Peace and Reconciliation Award at the Gandhi Awards for Reconciliation in Durban in 2003. In 2004, he was awarded the Good Brother Award by Washington, D.C.’s National Congress of Black Women for his commitment to gender equality and the emancipation of women in South Africa. In 2005, he was also awarded the Champion of the Earth Award by the United Nations.

Thabo Mvuyelwa Mbeki
« Previous PostLooking Black on Today: The Black Holocaust, May 31, 1921 Next Post »The Meaning Of The 4th Of July For The Negro: Frederick Douglass' Address To A White Audience (Video)