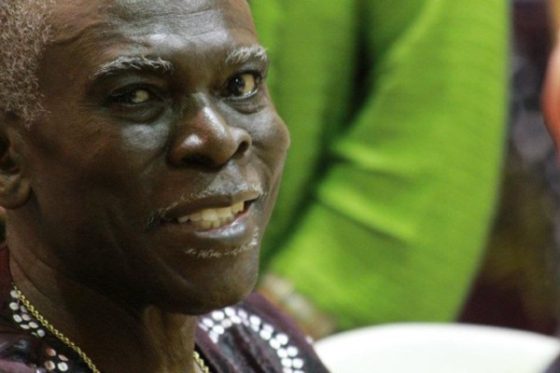 Obo Addy, a celebrated Ghanian drummer and dancer, lived in Portland for over thirty years and taught at Lewis & Clark College. Addy is best known for popularizing a genre known as worldbeat, a combination of European and African musical traditions.

Addy was born in 1936 in Accra, the capital of Ghana. He was the son of a Wonche medicine man, and by the age of six was designated as a drummer. Addy’s family was part of the Ga ethnic group, and he was raised playing in the musical traditions of the Ga people.

He got his professional start in Ghana by playing with the Joe Kelly Band, the Ghana Broadcasting Band, and the Farmer’s Council Band, which played popular American and European music. In 1969, he was hired by the Arts Council of Ghana as a Ga master, and he received his first international exposure at the Munich Summer Olympics in 1972.

Addy collaborated extensively with musicians. In 1992, he was commissioned by the Kronos Quartet to write “Wawshishijay” for their album, Pieces of Africa. He also wrote for Saxoforte, Third Angle New Music Ensemble, and modern dancer Mary Osland.

Addy received many accolades, including the Oregon Governor’s Arts Award (1993) and a Masters Fellowship from the Oregon Arts Council. In 1996, he received the National Heritage Fellowship Award from the National Endowment for the Humanities, the first native African to receive the prize. Obo Addy passed away of cancer in 2012.