The Alexandria Library was founded first as a subscription library in 1794, and became Alexandria’s public library in 1937. Although African-Americans paid taxes and voted during this time, they were not allowed to use the library. Two years later, a 26-year-old attorney named Samuel Tucker challenged the segregation.

On March 17, 1939, Tucker sent in a library card application for George Miller, a black resident. However, the library staff refused to give Miller a card. Tucker decided to organize and defend sit-in protesters, William (Buddy) Evans, Otto L. Tucker, Edward Gaddis, Morris Murray, and Clarence Strange. Tucker trained the men to act orderly and well-mannered, no matter what the response.

On August 21st, these men entered Alexandria Library one at a time, asking for a library card. When the men were denied the cards, each man calmly took a book off the shelf and sat down at a table to read. After two hours of not knowing what to do, the library staff called the authorities and had the five men arrested.

The men were charged with disorderly conduct, but the city delayed the case and no ruling was ever issued. Tucker was never able to argue his case for the five men. However, Samuel W. Tucker continued his fight against segregation and intolerance. 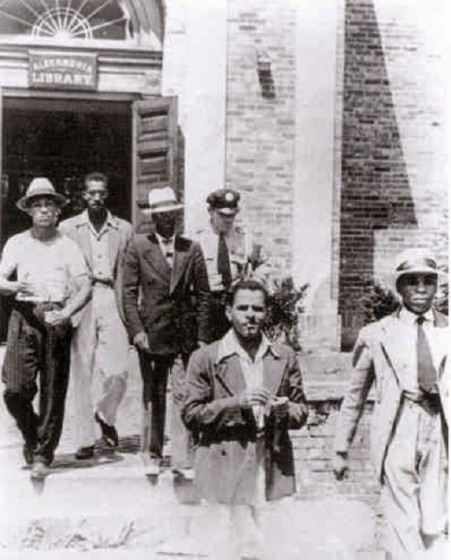 Alexandria Library sit-inAlexandria Library Sit-In 1939
« Previous PostBertha Pitts Campbell: Dedicated Her Life to the Fight for Equal Rights for Minorities Next Post »Did you know October is Black History Month, too?