Looking Black On Today In 1963, Civil Rights Leader Medgar Evers Was Assassinated In front Of His Jackson, MS  Home 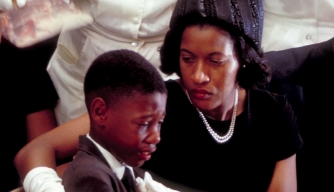 During World War II, Evers volunteered for the U.S. Army and participated in the Normandy invasion. In 1952, he joined the National Association for the Advancement of Colored People (NAACP). As a field worker for the NAACP, Evers traveled through his home state encouraging poor African Americans to register to vote and recruiting them into the civil rights movement. He was instrumental in getting witnesses and evidence for the Emmitt Till murder case, which brought national attention to the plight of African Americans in the South. On June 12, 1963, Medgar Evers was killed.

After a funeral in Jackson, he was buried with full military honors at Arlington National Cemetery in Virginia. President John F. Kennedy and many other leaders publicly condemned the killing. In 1964, the first trial of chief suspect Byron De La Beckwith ended with a deadlock by an all-white jury, sparking numerous protests. When a second all-white jury also failed to reach a decision, De La Beckwith was set free. Three decades later, the state of Mississippi reopened the case under pressure from civil rights leaders and Evers’ family. In February 1994, a racially mixed jury in Jackson found Beckwith guilty of murder. The unrepentant white supremacist, aged 73, was sentenced to life imprisonment.

« Previous PostRespectability Politics in the Civil Rights Movement: The Montgomery Bus Boycott Next Post »Looking Black On Today In 1964, Nelson Mandela Was Sentenced to Life in Prison