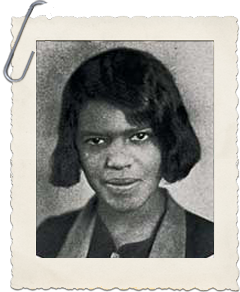 Lucile Bluford was a well-respected editor and publisher of the Kansas City Call, an important African American weekly newspaper. She was also a brave and persistent civil rights activist. In both her personal life and her career, she refused to remain quiet about racial injustice.

Bluford was born on July 1, 1911, in Salisbury, North Carolina. Her parents were John Henry Bluford, Sr. and Viola Harris Bluford. She had two brothers, John Jr. and Guion. When Bluford was only four, her mother died. Her father later married Addie Alston, and in 1918 he accepted a position teaching science at Lincoln High School in Kansas City, Missouri. Lucile moved with her family to Kansas City when she was seven years old.

During the time in America, schools throughout the South and bordering states like Missouri had a “separate but equal” rule in education. This meant that children of different races could not go to school together. Black students attended schools that were supposed to be equal in quality to the white schools, but most of them did not have the same resources. Lucile attended Wendell Phillips Elementary. At age 13, she started Lincoln High School, where her father taught. She was a very active and successful student and even wrote for the school newspaper. Bluford graduated first in her class in 1928.

Bluford discovered  her passion for journalism while working on the high school newspaper and yearbook. She considered schools to attend but knew the University of Missouri in Columbia, which had the oldest and most respected journalism school in the country wouldn’t admit African Americans. Her choices were very limited to colleges she could attend. She knew she study at the historically black college, Lincoln University, in Jefferson City, but it did not have a journalism program. So Lucile attended the University of Kansas in Lawrence instead. She graduated in 1932 with high honors.
She worked with the National Association for the Advancement of Colored People (NAACP), to break down the system of injustice against African Americans in higher education. She believed that education was the key to advancement and equal treatment in society. She tried eleven times to enter the University of Missouri. She filed the first of several lawsuits against the university on October 13, 1939. Bluford’s case was denied time and time again.
In 1941 the state supreme court finally ruled in Bluford’s favor. The University of Missouri had to admit her because no equal program existed at Lincoln University. In response, the School of Journalism closed its graduate program. It claimed that it could not operate properly because a majority of its professors and students were serving in World War II.
In 1984, a year after her nephew Guion S. Bluford, Jr. became the first African American astronaut in space, Bluford received an Honor Medal for Distinguished Service in Journalism from the School of Journalism.
source:
Lucile Bluford
« Previous PostKemper Harreld: Renowned African American Concert Violinist, Pianist & Organist Next Post »Schooled by Youtube: Heads of Hate #25: William McKinley