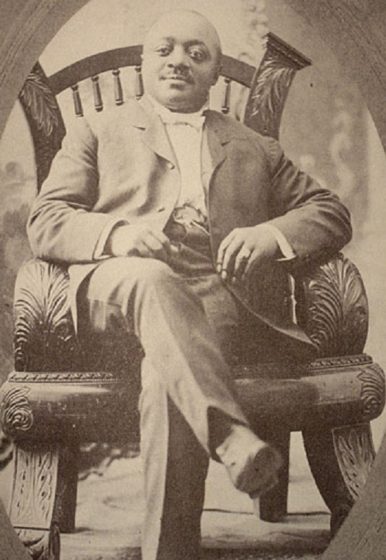 John “Mushmouth” Johnson was a black gambling-house proprietor who made a fortune controlling the city’s policy racket and other gambling enterprises. He was well-known throughout the city as the”Negro Gambling King of Chicago.”

Johnson had little formal education before he took a job as a porter in a Chicago gambling house in the 1880s. Although he was not a gambler himself, he learned the business quickly and opened his own nickel gambling house on Clark Street.

In 1890, Johnson sold this his gambling house on Clark Street and opened a saloon and gambling house at 464 South State Street that remained in continuous business for 17 years until his death. Johnson protected his business through bribes to the police and contributions to politicians.

It was a mark of Johnson’s success that he became a partner in the Frontenac Club, an establishment that catered only to wealthy whites. Johnson used his money to support “race advancement” causes in the black community, though his business was seen as disreputable by members of the older black elite. After his death in 1907, Johnson’s wealth contributed to the establishment of a new black business elite when his surviving sister, Eudora Johnson, married rising black banker Jesse Binga in 1912.