On this day of transition between the months of May and June, on 31st and 1st respectively, the U.S. witnessed one of the most devastating and terrific riots in history; the Tulsa Race Riots of 1921.

The Tulsa Race Riot, in Oklahoma, was one of the worst urban racial clashes in the history of the U.S. It was characterized by two days of violence by the whites against blacks, leaving approximately 50 people dead, hundreds injured, over 1,000 black-owned homes and businesses destroyed, and approximately 10,000 blacks homeless after being displaced. However, the number of lives lost during this riot has been a topic of debates, as different historical sources publish different numbers of deaths; even though, U.S. Red Cross recorded an estimate of 300 deaths, which has been supported by several historical sources. 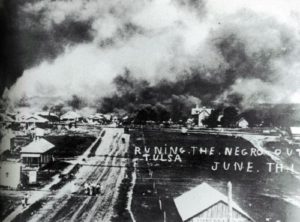 The riots occurred between May 31st and June 1st, 1921, when a white mob became violent and began attacking black residents and businesses of the African-American community in Greenwood in Tulsa, Oklahoma. The attacks organized and conducted both on the ground and in the air, destroyed over 35 blocks of the district. Approximately 800 people were admitted to hospitals, and more than 6,000 African-Americans were later arrested and detained.

The riots ensued during a Memorial Day weekend after a young black man, Dick Rowland, was accused of raping a young white female, Sarah Page, on 30th May, in the elevator operator at a commercial building. Mr. Rowland was then taken into custody. Several hours later, rumors quickly spread throughout the black community that Rowland was facing the risk of being lynched. Consequently, a group of armed black men rushed to the scene (police station) in which the young suspect was held. At the scene, drama and tension started when they found that a crowd of the white people had also anxiously gathered around the police station with unclear intentions. As a result, confrontations began between the whites and the blacks, and some gunshots were heard from the scene. A few black and white people were killed. This news spread throughout the entire city, prompting the eruption of mob violence.

On that night of transition between the last day of May and the first day of June, thousands of whites rioted through the black community until the next day. They killed men and women, burned and looted stores, businesses, and homes, all of which belonged to the black community. Properties approximated to be more than $1.5 million in the real estate were damaged, alongside personal assets worth $750,000. The total value of these damages was approximated to be equal to $30 million in 2017.

Several historical sources with records from the black witnesses claimed that the policemen had joined the white mob and the National Guardsmen directly fired their machine guns into the black crowds as a plane dropped sticks of dynamite into them. On the eyewitness account, in 2015, a source confirmed that the attorney, Buck Franklin Colbert, described the witnessing of a dozen of private planes dropping some burning balls of turpentine on the roofs of Greenwood buildings.

Read more of the story via: http://tulsahistory.org/learn/online-exhibits/the-tulsa-race-riot/

« Previous PostMay 31, 1870: The First Enforcement Act on Civil Rights is Signed into a Law by President Grant Next Post »Gwen B. Giles: First African American Woman Elected to the Missouri Senate