May 31, 1870: The First Enforcement Act on Civil Rights is Signed into a Law by President Grant

On this day, 31st May, 1870, the first Enforcement Act of 1870, also famously referred to as the “Civil Rights Act of 1870” or the “Force Act” or the “First Ku Klux Klan Act” was signed (assented) into law by the eighteenth President of the United States, President Hiram Ulysses Grant, after being passed by the U.S. Congress. 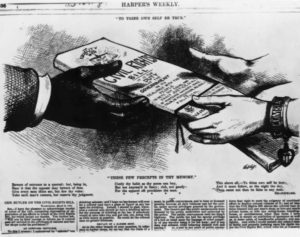 The Civil Rights Act or the Enforcement Act of 1870 was a U.S. federal law introduced to empower the U.S. President with the legal powers and authority to enforce the first section of the 14th Amendment in the entire United States. This act was historically marked as the first law enforcing acts among the three subsequent Acts passed by the United States Congress between the years 1870 and 1871. This coincided with the period of Reconstruction in the U.S., which was aimed at combatting attacks on the suffrage rights of the people from the Black community from the state officials or the commonly violent groups such as the Ku Klux Klan.

The Human Rights Bill 1293 was the first to be introduced by the Republican, John Bingham, into the House at Ohio on 21st February, 1870. However, this bill was never discussed until the 16th day of May, 1870. Contrary to the House Bill, the Senate Bill S.810 grew from several other diverse bills introduced by various Senators. Elaborately, the very first bill to be proposed was submitted to the Senate by February, 1870, by Senator George Edmunds of Vermont. The second bill submitted was from Senator Morton Oliver from Indiana, then followed by Senator Sumner Charles of Massachusetts, and finally, by Senator Steward Williams of Nevada. After three months of a series of rewriting by the Judicial Committee, the final version of the Bill was finally introduced into the Senate House and opened the floor for discussion on 19th April, 1870. At long last, the Act was finally passed by the Congress in May, the same year, and assented into law by the 18th President of the United States, President Hiram Ulysses Grant on 31st May, 1870.

The Civil Rights Act of 1870 prohibited the discrimination and biases by state officials in the U.S. voter registration, which was initially on the basis of color, race, or an individual’s previous condition of servitude. The law established heavy penalties on the interference with an individual’s civil rights and the rights of voting; hence, empowering the federal courts to enforce the act. As well, the Act authorized the U.S. President to adopt the use of the U.S. Army to help uphold the act, and the involvement of the federal marshals in bringing charges against any offender who involved in election frauds, intimidation, or bribery of voters. It also aimed at bringing to justice, the election offenders who conspire to prevent any U.S. citizen from exercising his/her constitutional rights.

This was truly the beginning of the Black Political Freedom.

Read more of the related stories from: http://www.crf-usa.org/black-history-month/the-civil-rights-act-of-1964