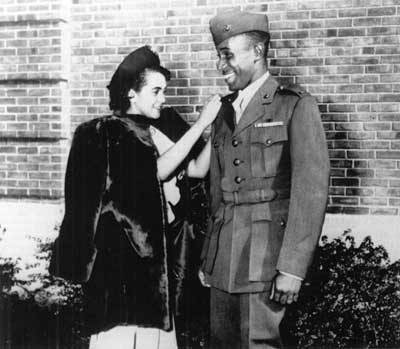 Born in Hamlet, N.C., Frederick C. Branch joined the Marines Corps in 1943, two years after President Franklin Delano Roosevelt allowed African-Americans to join the Marines through Executive Order 8802. He was trained at Camp Lejeune’s Montford Point as one of the “Montford Point Marines,” the first group of African Americans to serve in the Marines. Though his applications for Officer Candidate School was denied at first, he underwent ROTC at Purdue University’s Navy V-12 and made the dean’s list as the lone African-American in a class of 250. He was finally appointed as second lieutenant in 1945 and entered the Marine Corps Reserves after World War II concluded. A year after his death, the Marine Corps Recruiting Command created the Frederick C. Branch Leadership Scholarship in his honor. It’s designated for students who have received letters of acceptance or currently attend one of the 17 historically black colleges or universities that have ROTC programs.