Colored Francie was made from the same mold as her counterpart. She bared the same eyes, nose, chin, etc. Meaning she was a Barbie dipped in chocolate. As you can imagine it hit the fan in the 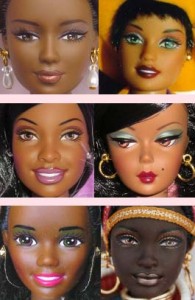 African American community and the doll was pulled in 1976. Now, if “colored Francie” was suppose to be Barbie’s chocolate cousin it still left up to debate. See our Controversy section to see more.

The first Black Barbie debuted in 1980 though some say it was 1979. With the loving title “Black Barbie” and was made with the Steffie face mold. She word a red two piece the quickly transformed from a fashion savvy office woman to bathing suit. We can’t over look the uncanny resemblance of the doll to Felicia Rashad. The Cosby Show was doing wonderful things in the 80’s. It’s would be suspecting to model the first Black Barbie after a women every little African American girl wanted to be when she grew up, “Claire Huxstable”. The Black Barbie has had many facial, skin tone, and hair changes. The colors of the Black Barbies now cover the entire spectrum of African American women, not to mention ethnic women world wide.   The beauty in the change of they eye color, lip shape, cheekbones, chins, short hair, long hair dreadlocks and so much more. Each doll is beautiful in her own way, just like the beautiful women of color.