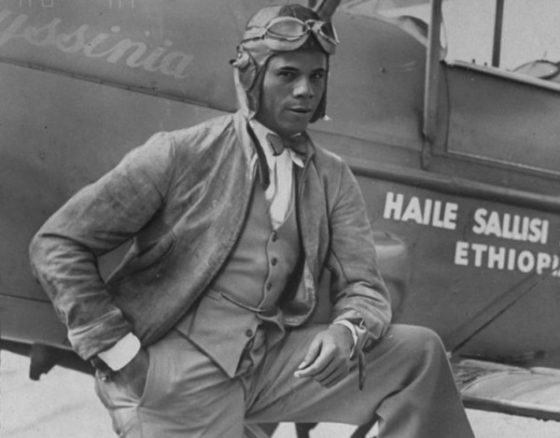 Huberto Fauntleroyana Julian was known to the world as the Black Eagle. Julian was a famous aviator and soldier. He was one of the first black men to get his pilot’s license.

Julian was born in Port of Spain, Trinidad, in 1897. His father, Henry, was a cocoa plantation manager in Taco. Julian caught his first glimpse of an airplane on January 3, 1913, when Frank Boland performed an exhibition flight, ultimately crashing and dying.

The shock of the crash stayed with Julian who, after World War I, left his island home for Canada. While in Canada, in November 1920, Julian flew for the first time during a joyride with Canadian flying ace Billy Bishop. Shortly after this, he designed and patented what was labeled an “Aeroplane Safety Appliance.

In 1921, Julian left Montreal for good and moved to Harlem. Once there he came under the influence of the charismatic Marcus Garvey and joined the Universal Negro Improvement Association. Julian was known for performing aerial stunts and flying his plane over rallies for Garvey. He unsuccessfully attempted a transatlantic flight from New York to Africa in 1924, and barely survived when his plane crashed into the ocean. Julian successfully made the trip five years later.

In 1931, Julian set the non-stop non-refueling aviation endurance record with a flight of 84 hours and 33 minutes. He also toured with an all-black flying circus known as The Five Blackbirds. When Italy invaded Ethiopia in 1935, the Julian flew to the African nation to fight for Emperor Haile Selassie, who had made Julian an honorary citizen in 1930 and awarded him the rank of colonel. Huberto Fauntleroyana Julian died in New York City in 1983.

Huberto Fauntleroyana Julian
« Previous PostMary F. Berry: First Black Woman to Head a Major Research University Next Post »Ida B. Wells: 5 Things You Need to Know About The Woman Who Used Journalism To Stand Up Against White Supremacy And Segregation