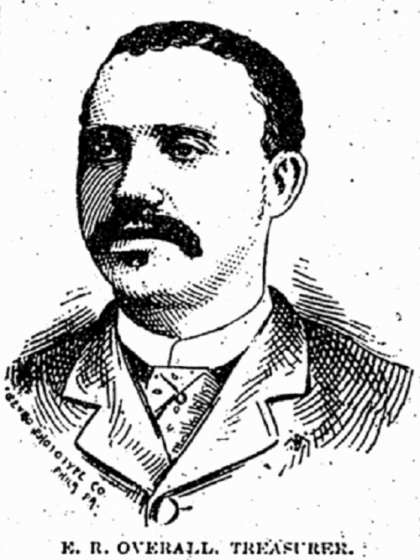 Edwin R. Overall aka Edwin R. Williams was an abolitionist, civil rights activist, civil servant, and politician in Chicago and Omaha. Williams was the first African American to hold a government job in Nebraska when he was appointed as the general delivery clerk for the post office this year.

Overall was born into slavery in Saint Charles County, Missouri, August 25, 1835 to a man with the last name of Overall. Edwin was probably born to a slave woman with the last name of Williams and for the first part of his life used Williams as his last name. As a boy, he worked on a farm, and he moved to Chicago about 1855 where he attended the Jones School. In 1861 he read law in Chicago, but discontinued for financial reasons. He moved to Omaha in the late 1860s.

In the 1850s and 1860s, he was involved in abolition and underground railroad activities headed at Chicago’s Quinn Chapel AME Church. During the U. S. Civil War, he recruited blacks in Chicago to join the Union Army. After the war, he moved to Omaha where he was involved in the founding of the National Afro-American League and a local branch of the same.

He was the first black in Nebraska to be nominated to the state legislature in 1890. He lost the election, but in 1892, his friend Matthew O. Ricketts became the first African-American elected to the Nebraska legislature. He was also a leader in Omaha organized labor.

Overall’s work brought him into contact with many friends who visited him in Omaha, including Paul Lawrence Dunbar. His close relationship with the city government and military experience placed him on the reception committee for the visit of Ulysses S. Grant to Omaha in 1879. He was also closely aligned with Andrew and Edward Rosewater in various Omaha civic affairs, as well as with Mayors Bemis and Moores. Overall died July 31, 1901 of Bright’s disease.