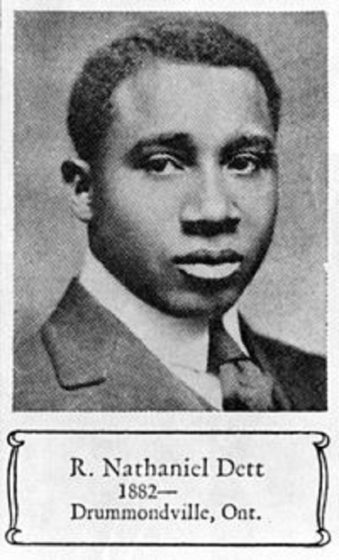 Robert Nathaniel Dett was a composer, organist, pianist, and music professor. He was best known for his use of African-American folk songs and spirituals as the basis for choral and piano compositions during the 19th-century Romantic style of Classical music.

Dett was born on October 11, 1882, in Drummondville, Ontario. His mother was a native of Ontario and his father was from the United States. He learned to play the piano at a very early age and received piano lessons at the age of five. Around the age of 14, he played the piano for his local church and studied at the Oliver Willis Halstead Conservatory of Music from 1901 to 1903.

He continued his piano studies at the Lockport Conservatory, matriculating to the Oberlin Conservatory of Music. It was at Oberlin when he was first introduced to the idea of using spirituals in classical music; he heard the music of Antonín Dvořák, which reminded him of the spirituals his grandmother taught him.

Dett was the first black student to complete the five-year course at Oberlin. He then toured as a concert pianist and wrote only rudimentary piano compositions during this period.

He completed his first degree, a Bachelor of Music with a major in composition and piano in 1907. Within that year, he started teaching at Tennessee’s Lane College, followed by a tenure at the Lincoln Institute in Jefferson City, Missouri. During this period, he wrote practical choral and piano pieces suitable for his students.

His position as a major pianist-composer was earned in 1914. His piece, Magnolia, was performed at the Samuel Coleridge-Taylor Club. On June 3 that year, he performed Magnolia and In the Bottoms. The Chicago Evening Post reported that among the works on the “All Colored” program, his works were the most innovative and complimented his high level of piano skills.

From 1924 to 1926, he served as the president of The National Association of Negro Musicians. Founded in 1919 in Chicago, the organization is the United States’ oldest organization dedicated to the preservation, encouragement, and advocacy of all genres of African American music.

Dett never stopped studying and learning about the intricacies of music. Each summer, he attended major national institutions. He composed and arranged collections of spirituals, including Religious Folksongs of the Negro, and The Dett Collections of Negro Spirituals. Dett received a Holstein prize for his contributions as a composer. Robert Dett died in 1943 while traveling with the United Service Organization.