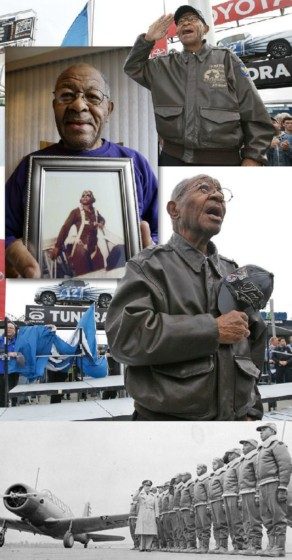 George Hickman was one of the original Tuskegee airmen and a longtime usher at the University of Washington and Seattle Seahawks games. He is remembered as one of the country’s first black military pilots and ground crew members who fought in World War II.

Cadet Captain Hickman from St. Louis, and was the grandson of slaves. His father had a third-grade education, but he encouraged his son and daughter to learn how things worked. He specifically helped Hickman pursue an interest in aviation that began as a curious 6-year-old looking into the sky which evolved into buying model airplanes.

After qualifying for the new program at Tuskegee, he went through it twice. He was initially eliminated from pilot training in 1943. As a cadet captain, he called out white superior officers for the mistreatment of a fellow black cadet and was effectively blocked from flying. However, that did not stop Hickman from reaching his goals. He completed the program as a crewman and served in Europe as a flight mechanic during the war.

Once his tour was completed with the Tuskegee Airmen in 1945, he took a job working for Boeing in Seattle, Washington for nearly 30 years as a B-52 engineering training instructor and executive in the aerospace division. Hickman was ultimately in charge of accounting for $185 million in Boeing training equipment. He tallied invoices and purchase orders by hand.

Hickman, along with the other remaining Tuskegee Airmen received a congressional gold medal in 2007. George Hickman passed away on Sunday, August 19, 2012 in Seattle, WA.