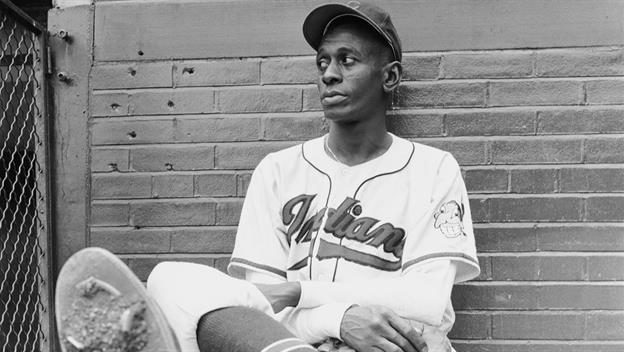 On this day in 1971, pitcher Leroy “Satchel” Paige becomes the first Negro League veteran to be nominated for the Baseball Hall of Fame. In August of that year, Paige, a pitching legend known for his fastball, showmanship and the longevity of his playing career, which spanned five decades, was inducted. Joe DiMaggio once called Paige “the best and fastest pitcher I’ve ever faced.”

Paige was born in Mobile, Alabama, most likely on July 7, 1906, although the exact date remains a mystery. He earned his nickname, Satchel, as a boy when he earned money carrying passengers’ bags at train stations. Baseball was segregated when Paige started playing baseball professionally in the 1920s, so he spent most of his career pitching for Negro League teams around the United States. During the winter season, he pitched for teams in the Caribbean and Central and South America. As a barnstorming player who traveled thousands of miles each season and played for whichever team met his asking price, he pitched an estimated 2,500 games, had 300 shut-outs and 55 no-hitters. In one month in 1935, he reportedly pitched 29 consecutive games.

In 1947, Jackie Robinson broke baseball’s color barrier and became the first African American to play in the Major Leagues when he joined the Brooklyn Dodgers. The following year, Paige also entered the majors, signing with the Cleveland Indians and becoming, at age 42, baseball’s oldest rookie. He helped the Indians win the pennant that year and later played for the St. Louis Browns and Kansas City A’s.

Paige retired from the majors in 1953, but returned in 1965 to pitch three innings for the Kansas City A’s. He was 59 at the time, making him the oldest person ever to play in the Major Leagues. In addition to being famous for his talent and longevity, Paige was also well-known for his sense of humor and colorful observations on life, including: “Don’t look back. Something might be gaining on you” and “Age is a question of mind over matter. If you don’t mind, it doesn’t matter.”