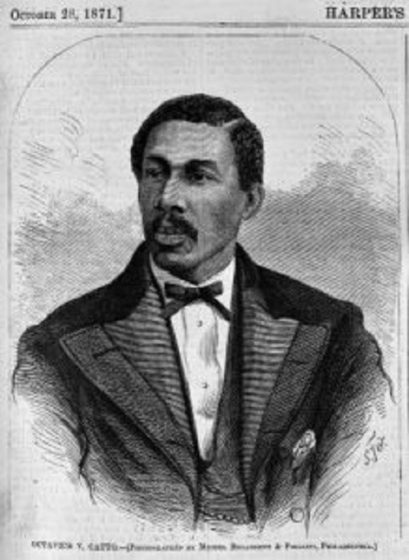 African American rights activist Octavius Catto was murdered on the edge of the Fifth Ward on Election Day, 1871, in a racially-motivated crime.

Philadelphia’s Fifth Ward, south of Chestnut Street near the Delaware River, became infamous in the late nineteenth century for election-day riots among the Irish, blacks, and the police, with ward boss William “Bull” McMullen (1824-1901) at the center of the violence. By the early twentieth century, the area had become known as the “Bloody Fifth,” a district of rampant political violence where politicians exploited residents, mostly immigrants, for their collective vote a short distance from Independence Hall.

The Fifth Ward originated as part of the reorganization of election wards following the consolidation of Philadelphia city and county in 1854.

On Election Day in 1871, violent conflict among the Irish, African Americans, and the police spilled over in both the Fourth and Fifth Wards after blacks obtained the right to vote for the first time. On that day, murder claimed the life of African American civil rights activist and educator Octavius Catto (1839-71). These wards had become Republican strongholds shadowed by the influence of Fourth Ward boss William McMullen. Rivalries in the Bloody Fifth persisted well into the early to mid-twentieth century as two factions of the local Republican Party, led by William H. Vare (1867-1934) and Jim McNichol (1864-1917), battled for votes and lucrative contracts for city services.

At the pinnacle of the era of Republican machine politics controlled by ward bosses, the Fifth Ward’s most notorious conflict occurred during a heated primary race in 1917 for the office of Select Councilman and ended in the death of a police officer.