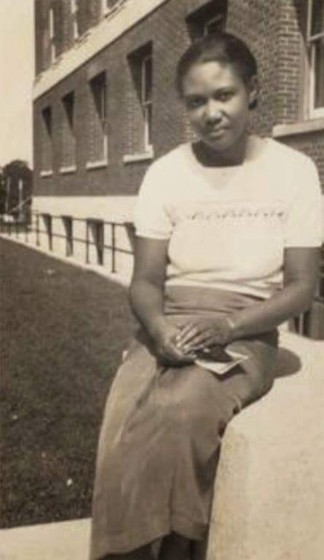 Dr. Roger Arliner Young was a scientist of zoology, biology, and marine biology. She was the 1st African-American woman to receive a doctorate degree in zoology.

HER EDUCATION: In 1916, Young enrolled at Howard University in Washington, D.C.to study music. She did not take her first science course until 1921. Though her grades were poor at the beginning of her college career, some of her teachers saw promise in her. One of these was Ernest Everett Just, a prominent black biologist and head of the Zoology department at Howard.

Young graduated with a bachelor’s degree in 1923. Just tried unsuccessfully to help her to gain funding for graduate school, but in 1924 Young began studying for her master’s degree at the University of Chicago, which she received in 1926.

HER CAREER: Young worked with Ernest Everett Just for many years, teaching as an Assistant Professor at Howard University from 1923 to 1935. Research was done during the summers. Young assisted Just in his research from 1927 through 1930, but although her assistance was noted in his grant applications, her name does not appear as a coauthor in the resulting publications.

While studying at Chicago, she was asked to join Sigma XI, a scientific research society, which was an unusual honor for a master’s student. In 1924 her first article, “On the excretory apparatus in Paramecium” was published in the journal Science, making her the 1st African American woman to research and professionally publish in this field.

Ernest Everett Just invited Young to work with him during summers at the Marine Biological Laboratory in Woods Hole, Massachusetts beginning in 1927. While there, they worked on researching the fertilization process in marine organisms, as well as the process of hydration and dehydration in living cells. In 1929, Young became interim department head for the zoology department for the time while Just was in Europe seeking grant money.

MORE EDUCATION: In the fall of 1929, Young returned to the University of Chicago to begin her doctorate degree under the direction of Frank Rattray Lillie. Lillie had been a mentor of Just while both were involved with the Marine Biological Laboratory.

However, in 1930 she failed to pass her qualifying exams, and for a time, disappeared from the scientific community. She returned to Howard University to teach and continued working with Just at the Marine Biological Laboratory during the summers.

Around 1935, rumors started circulating that there was a romance between Just and Young, and in 1936 they had a huge confrontation. Later that year she was fired, ostensibly because she mistreated lab equipment and missed classes. She used this setback as an opportunity to try again to obtain a Ph.D.

In June 1937, she went to the University of Pennsylvania, studying withLewis Victor Heilbrunn (another scientist she met at the Marine Biological Laboratory) and graduated with her doctorate in 1940.

After obtaining her doctorate, Young became an assistant professor at the North Carolina College for Negroes and Shaw University (1940–1947), and held teaching positions in Texas, Mississippi and Louisiana until 1959.

HER LEGACY: Young contributed a great deal of work to science. She studied the effects of direct and indirect radiation on sea urchin eggs, on the structures that control the salt concentration in paramecium, as well as hydration and dehydration of living cells.

She published four papers between 1935 and 1938 and also wrote several books.

In the 1950s she was hospitalized for mental health problems. Roger Arliner Young died on November 9, 1964 in New Orleans, Louisiana.