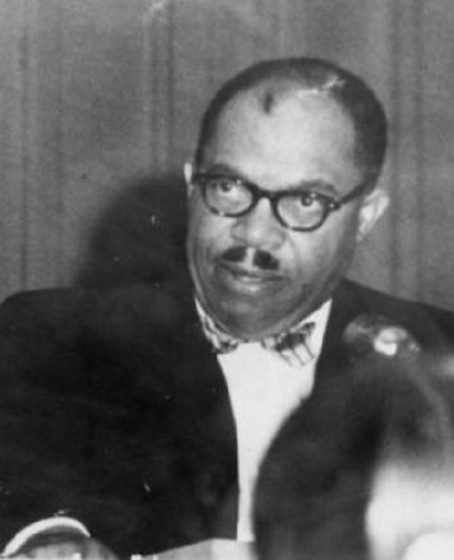 Dr. Theodore Roosevelt Mason (T.R.M) Howard was a physician, civil rights activist and entrepreneur. Howard first reached national prominence in 1955 when he became involved in the Emmett Till affair.

Howard was born on March 4, 1908 to Arthur and Mary Howard  in Murray, Kentucky. He later adopted the name “Mason” in honor of Will Mason, his childhood mentor and a prominent local white doctor and member of the Seventh-day Adventist Church.

He attended three Seventh-day Adventist colleges: Oakwood College in Huntsville, Ala., from which he graduated in 1927; Union College in Lincoln, Neb., where he received his bachelor of science degree in 1931; and the College of Medical Evangelists in Loma Linda, Calif., from which he received his doctor of medicine degree in 1936. While at Union College, Howard was an active member of the American Anti-Saloon League and won the League’s national contest for best orator in 1930. He became a voice of the civil rights and political causes while living in California and wrote a regular column for the California Eagle, then the primary black newspaper of Los Angeles.

He was later elected president of the National Medical Association, the highest office any black physician could hold at that time. As a civil rights leader, Howard founded the Regional Council of Negro Leadership (RCNL) in 1951.

During the time when young Emmett Till was murdered, Howard, who was then living near the town, turned his home into a “black command center” for reporters, witnesses, and investigators searching for evidence.  Although the two men charged with Till’s murder were acquitted, Howard continued to speak out for civil rights and relocated to Chicago after receiving death threats for his role in the Till case.  In 1956 during a Ku Klux Klan reign of terror in Mississippi, Howard was forced to leave the state. He subsequently settled in Chicago.

Howard’s other accomplishments included helping found the Chicago League of Negro Voters and Operation PUSH. He was first vice president of the Tri-State Bank in Memphis, Tenn., a member of the Board of Directors of Universal Life Insurance Company of Memphis. Howard died on May 1, 1978.