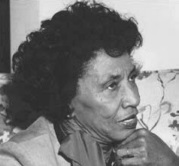 Undine Eliza Anna Smith Moore was a notable and prolific African-American composer of the 20th century. She was also a professor emeritus at Virginia State University. Moore wrote more than 100 compositions, of which only about 26 were published in her lifetime.

Moore was born on August 25, 1904, in Jarratt, Virginia. She was the granddaughter of slaves. Her family moved to Petersburg, Virginia, in 1908, where she discovered her love of music and began studying piano. After completing her primary education, Moore attended Fisk University, where she studied piano with Alice M. Grass.

Moore co-founded and co-directed the Black Music Center at Virginia State from 1969 to 72. The Center was responsible for bringing to the campus leading black composers and lecturers.

She wrote in many musical genres, including compositions for solo voice, chamber ensemble, various solo instruments, and a large number of choral works. Her best-known compositions include Afro-American Suite for Flute, Cello, Piano recorded by Trio Pro Viva; and The Lamb recorded by the Virginia State College Choir.

Among her many awards were the National Association of Negro Musicians Distinguished Achievement Award in 1975, the Virginia Governor’s Award in the Arts in 1985, and a Candace Award from the National Coalition of 100 Black Women in 1984. Undine Smith Moore died in Petersburg, Virginia on February 6, 1989. A composition by Adolphus Hailstork, “I Will Lift Up Mine Eyes,” was written in tribute to Moore.