Ida Keeling finished last in her 100-meter race at the Gay Games in Akron, Ohio, Tuesday, but she still ran away with the show.

That’s because Keeling is 99 years old and really fast for her age.

Keeling, a great-great grandmother from New York City, finished the race against competitors of many ages in 59.80 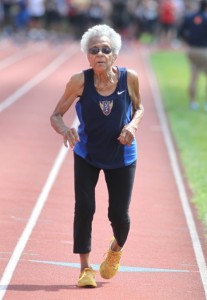 seconds. Her daughter, Shelley, also Ida’s coach and a competitor at the Gay Games, said that no woman at 99 “has ever recorded a faster time in an internationally certified 100-meter race,” NewsNet5 writes.

USA Track And Field, the national governing body of the sport, does not list a 100-meter best for women beyond the 90-94 age group. But Keeling has previously made headlines for her record-setting exploits.

Keeling actually walks with a cane, the Plain Dealer reported. “Walking with a cane takes minutes,” she told the newspaper before the race. “Running with the champions takes seconds.”

According to outlets, Keeling began running after she lost her two sons to drug-related killings more than 30 years ago. This was her first Gay Games, a competition she sees “just as running with other runners,” her daughter said.

Keeling turns 100 in May and hopes to break more records. Her secret to staying young and swift?

“Do what you need to do, not what you want to do and don’t leave out your daily exercise,” she says in the segment above. “Love yourself.”