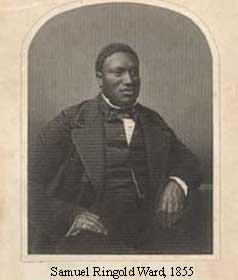 Rev. Samuel Ringgold Ward and Frederick Douglass established the first black American labor union The American League of Colored Laborers (ALCL) It was formed in New York City in 1850 as a collective for skilled free craftsmen, and sought to develop agricultural and industrial arts skills among its members, and to encourage African American business.
———–
This revelation may explain the deliberate shortage of Public Vocational And Technical Schools today and the subsequent strain between Booker and DuBois.
————CLICK & LISTEN To Black Abolitionists chapter 4 on The Gist of Freedom @ WWW.BlogTalkRadio.com/BlackHISTORY
Or Our Book Discussion On Thursday at 8pmwww.BlackHistoryBLOG.comThe same year, The Slavers passed the Fugitive Slave Law which targeted Black Abolitionists. The new law deputized and paid anyone who helped capture and enslave any Free black they suspected of being a fugitive, run-away slave. The law also arrested anyone involved in the rescue of a “suspected fugitive slave”.

Ward a well known abolitionist, became involved in the rescue of a fugitive slave, William “Jerry” Henry in 1851. Then, like hundreds of other abolitionists, fearing arrest, he took refuge in Canada.

Around noon on October 1, federal marshals from Rochester, Auburn, Syracuse, and Canandaigua, accompanied by the local police, arrested William “Jerry” Henry. Word of the arrest quickly reached the Convention, then in session at a nearby church. There are reports that the wife of Commissioner Sabine, who would hear the case, had already leaked plans of the arrest.

“Fellow citizens! We are here in the most extraordinary circumstances,” ex-slave Samuel Ward,” told a gathering in Clinton Square of Syracuse. “We are witnessing such a sight as, I pray, we may never look upon again. A man in chains, in Syracuse! … What a term to apply to an American! How does this sound beneath the pole of liberty and the flag of freedom?

Ward told the residents they were responsible, in part, for the existence of the Fugitive Slave Law because they elected the men who made it law. He asked the crowd: “Do you promise, so help you God, so to vote, as that your sanction never more shall be given to laws which empower persons to hunt, chain and cage men in our midst?”

By pre-arranged signal, church bells began ringing, and a crowd of Negroes and Whites gathered at Sabine’s office, where Jerry had been taken for arraignment. An immediate effort to free the prisoner was unsuccessful, and though he escaped to the street in irons, he was rapidly recaptured. The arraignment was put off until evening and relocated to a larger room. A large crowd gathered in the street, this time equipped for a more serious rescue attempt.

With a battering ram the door was broken in and despite pistol shots out the window by one of the deputy marshals, it became clear that the crowd was too large and determined to be resisted.

The crowd broke into the jail and forced the marshals to free William “Jerry” Henry. One deputy marshal broke his arm jumping from a window to escape the crowd. The injured prisoner was hidden in the city for several days in the home of a local butcher known for his anti-abolitionist sentiments.
The Rev. (and later Bishop of the AMEZ church)

Jermain Wesley Loguen and Sam May of Syracuse helped organize the escape of Jerry’s escape who was taken in a wagon to the home of William Lyman Salmon in Oswego, from which he crossed Lake Ontario into Canada.