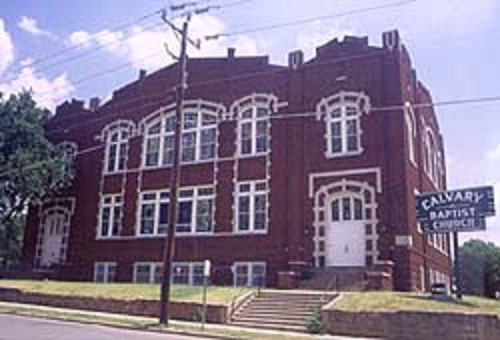 Calvary Baptist Church was the physical and spiritual base for a multi-year sit-in campaign that changed the face of segregation in Oklahoma City.
The church was constructed in 1921 by black architect and church member Russell Benton Bingham. Calvary Baptist opened doors as a three-story brick building with twin towers capped by brick parapets. In the early 20th century it served as the religious and social center of Oklahoma City’s black community.

The sit-ins at that time were called sitdowns which started in 1957 when 26 high school drama students visited St. Louis, where they ate at integrated lunch counters. Back home and determined to change “Jim Crow” Oklahoma, they met at Calvary with their drama teacher and an NAACP advisor to plan a sit-in campaign. On August 19, 1958, 12 youths marched to nearby Katz Drug Store and took unoccupied seats at the lunch counter. When they were not served, they remained, quiet and orderly. After another sit-in, the next day, Katz’s manager agreed to serve them. At the second stop, S.H. Kress and Company, the youths were not so lucky. The store yielded but all stools at its lunch counter were removed. The sit-ins were repeated almost on a daily basis, at food service spots all over the city.

When the students and other local blacks showed up for the “Everyone Welcome” grand opening of a new cafeteria on Lincoln Boulevard. They were turned away. In time, white protestors joined the demonstrators. By mid-1961, more than 175 city restaurants had opened their doors to the black community, and before long, segregated eating places had virtually disappeared in Oklahoma City. Calvary was the “start” and the “finish” for most of the sit-ins, despite numerous threats to cancel the church’s insurance and to bomb the building.