In 1927, after weeks of rain, the Mississippi River poured over into hundreds of towns, killing thousands of African-Americans and leaving a million people homeless. April was a record-breaking month for rain downpours, and this major storm ultimately put black men against whites, money against honor, and father against son.

People of the Mississippi Delta made their living through planting and producing cotton. The biggest fear of the people living there was the Mississippi river. After the civil war, planters and businessmen depended on the fertile soil for productivity. Most of them had a decent life and wanted to maintain their lifestyle. Blacks had no problem finding work, many of them were employed as sharecroppers. They were provided with a small plot of land but usually everything else they had was purchased on credit.

The violent storm ripped through Greenville, Mississippi, on April 15, 1927, which was Good Friday.

Prior to the storm, The Percys, a prominent family in town, were hosting a party in one of the area’s finest homes. The rain intensified and many of the guests grew weary. They began to question “Former Senator Percy” as to whether or not the levee would hold.  A group of men gathered together and left to check whether or not the levee was protecting the town. The levee was indeed holding, but barely. 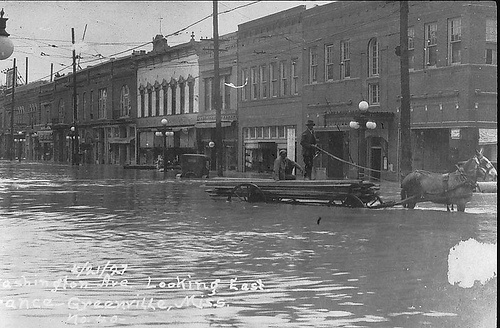 As the levees began to crumble from the surrounding states and push south, Percy and fellow planters pulled black workers from the fields to battle the river. The group became a part of 30,000 men strong, even convicts were helping to raise the height of the levees with rows of sandbags. However, there was a need for more men, so Greenville’s police department began to use force to bring in more blacks to get the job done.

All black people, including children, were sent to protect the levee. Percy had set up “concentration camps” on the levee to protect Greenville, complete with field kitchens and tents for thousands of plantation workers–all African Americans–to live as the men handled sand bags.

Whites stood with guns pointed at the blacks, and those who did not have guns used shovels and whatever else they could find to keep the blacks at their posts. Planters feared that if the laborers were evacuated from the region, they would not return to the Delta, resulting in a labor shortage.

During the storm, white families who could afford to get out of town boarded trains and left. When the water started rising two feet a day, the black men left guarding the levee knew their efforts were pointless. They wanted to abandoned their posts and leave the sandbags that were about to give way at any moment, but they were threatened. The levee did give away and swept through the town of Greenville, Mississippi, wiping out homes, businesses, crops, livestock, and taking the lives of thousands of blacks.

The devastation of the flood strained the relationships between blacks and whites. Blacks were not complying with orders given by whites and were being killed. Many blacks who were left with nothing joined the Great Migration and headed to northern and midwestern cities. 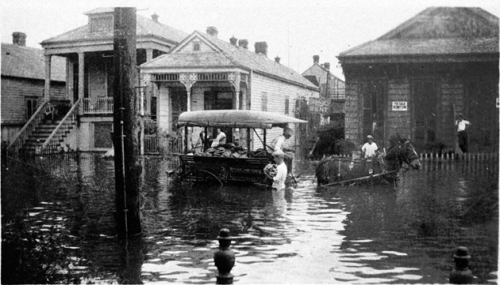 Great Mississippi FloodMississippi Flood 1927
« Previous PostHow The "Mississippi Plan" Was Used To Disenfranchises African Americans Before Jim Crow Next Post »Did You Know That Disney Released A Cartoon Featuring A Freed Slave As The Hero?