June 2, 1863: In the early morning hours, Harriet Tubman guided three steamboats around Confederate mines in the waters leading to the shore. Once ashore, the Union troops set fire to the plantations, destroying infrastructure and seizing thousands of dollars worth of food and supplies.

When the steamboats sounded their whistles, slaves throughout the area understood that it was being liberated. Tubman watched as slaves stampeded toward the boats. “I never saw such a sight,” she said later, describing a scene of chaos with women carrying still-steaming pots of rice, pigs squealing in bags slung over shoulders, and babies hanging around their parents’ necks.

Although their owners, armed with handguns and whips, tried to stop the mass escape, their efforts were nearly useless in the tumult. As Confederate troops raced to the scene, steamboats packed full of slaves took off toward Beaufort.

More than 700 slaves were rescued in the Combahee River Raid. Newspapers heralded Tubman’s “patriotism, sagacity, energy and ability,” as well as her recruiting efforts – most of the newly liberated men went on to join the Union army. 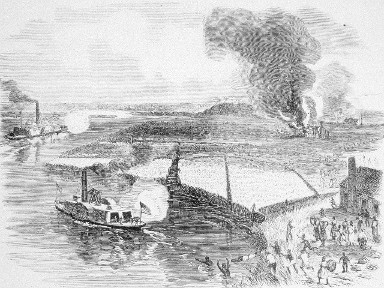